FILM REVIEW – ANT-MAN AND THE WASP: HEAVY ON JOKES, LIGHT ON ACTION 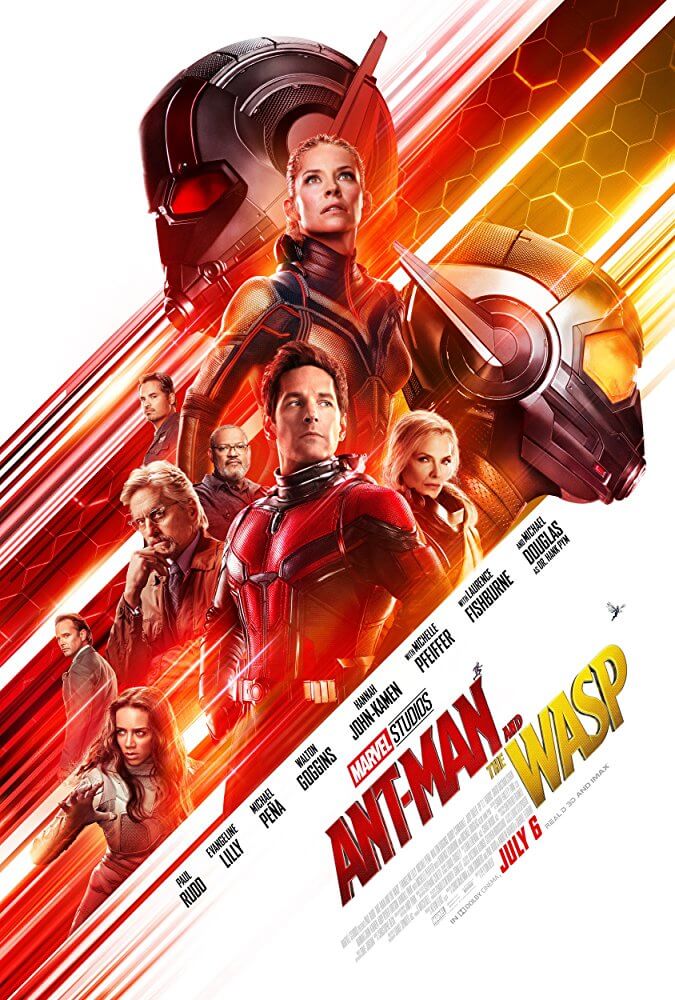 Ant-man and the Wasp is Marvel Studios’ follow up to the colossal, game-changing events of Avengers: Infinity War. In Scott Lang’s second adventure we see him team up with Hope Van Dyne (Evangeline Lilly) and Hank Pym (Michael Douglas) once again to rescue Janet Van Dyne (Michelle Pfeiffer) from the Quantum Realm.

Director Peyton Reed returns to try and cleanse our palette from the “dark”, “heavy”, and “intimidating” epic Infinity War. Unfortunately for us, Reed’s second outing in the MCU is a small scale, unimaginative vision of a frustratingly awful script.

Ant-man and the Wasp starts like many of the recent MCU films, with a flashback, and from then on Ant-man and the Wasp meanders for nearly 120 minutes. As promised by the forgettable trailers, this film tries to deliver much of the comedy that you fell in love with the first time around. Fan favorite Luis (Michael Péna) returns and is one of the biggest reasons Ant-Man and the Wasp gets so many laughs. Reed, being familiar with comedy over the course of his career, uses the camera to time his comedy as a comedic veteran should.

On that front, Ant-man and the Wasp delivers right alongside very few set pieces. Although the action is few and far between, the visual effects dazzle and emulate a star-spangled fireworks show during those sequences. Even if the action isn’t as inspiring or as well articulated as in the first film, there are multiple moments that showcase an unlimited arsenal at Reed’s disposal.

To quote Alfred Hitchcock,”If it’s a good movie, the sound could go off and the audience would still have a perfectly clear idea of what was going on.” With that being said, the script for Ant-man and the Wasp is a travesty in storytelling. Cinema being the visual medium that it is, it’s evident that the script was written with no concern for trusting the audience. From the opening prologue until the very final second, not a scene goes by that benefits from the camera being used to tell the story. Endless spoonfuls of information are delivered in chunky, overwhelming sizes from every character in the film and that’s why Ant-man and the Wasp completely collapses. The film’s middle section relies on extensive backstory and it seemingly never leaves the “exposition” phase of a story structure. During the film’s transition from the first to second act, when the characters are reacting to a game-changing scenario, the film never stops expositing endless amounts of new information.

Around the mid-way point is when Ant-man and the Wasp turns into an exhausting bog no different than running an endurance test. The jokes get weaker, the action evaporates, and the film’s antagonist offers up nothing more than another face to participate in a large game of “hot potato”. Simply put, there’s a lack of urgency or meaningful movement within the script and direction among an otherwise simple premise.

By some miracle, the MCU managed to produce back-to-back pieces of set-up for the “true” conclusion to this era of the MCU’s story. It plays like a film that its makers knew we were obligated to see after the conclusion of Infinity War. I already can’t imagine what will be offered in 2019’s Captain Marvel being a prequel to most of the films in the MCU.

Ant-man and the Wasp is neither a good sequel to Ant-man nor a good prequel to Infinity War Part 2 (or whatever they’re going to title it). It’s a meandering romp that’s heavy on jokes and light on action. Scott Lang delves into passivity to elevate the fun factor and the dialogue is noticeably awful for many of the film’s veteran actors.

Evangeline Lilly is a worthwhile performer and is the best actor in the whole show. You’ll find that the film’s visual effects rank near the top of the MCU and they’ll soothe a migraine from information overload. It’s clear that Marvel Studios is attempting to channel the ethos of the source material it’s based off of, but it’s more concerned with being a page turner rather than a true motion picture.

Ant-man and the Wasp gets a Bronze Rating