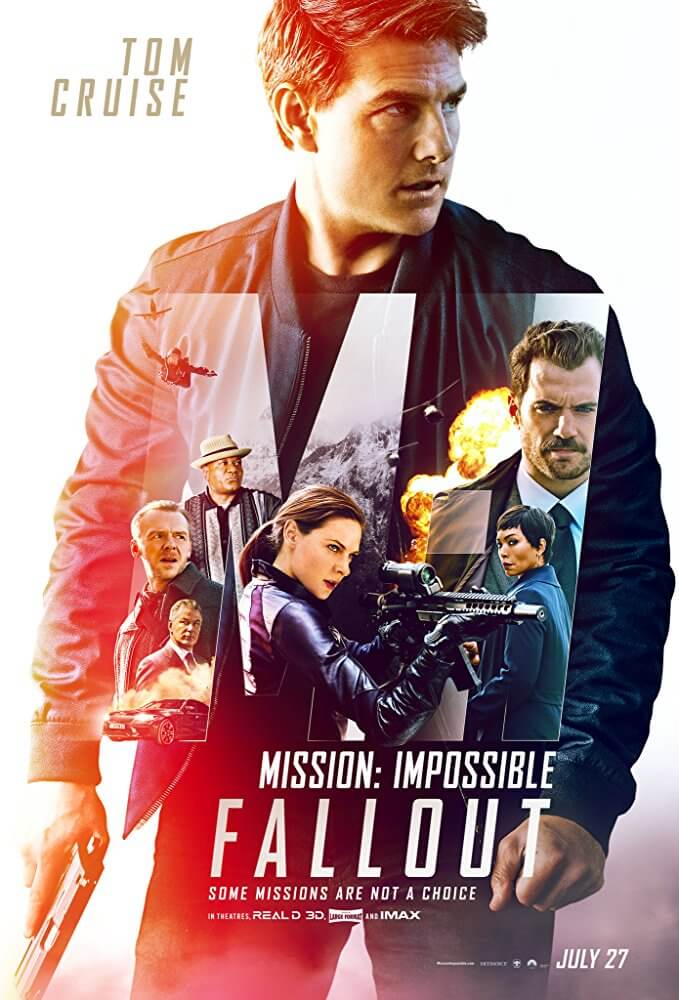 Despite being the sixth entry, Fallout manages to be the first film in the franchise to have a returning director in Christopher McQuarrie, and is also the first true sequel to a previous entry. Whereas most sequels in this franchise are usually separated by an unidentified amount of years, Fallout takes place two years after the events of Rogue Nation (2015), when Ethan Hunt and the rest of the IMF team are still suffering from the ramifications and consequences of the demise of Solomon Lane.

As you’ve already read throughout social media and probably seen on Rotten Tomatoes, Mission: Impossible – Fallout is a groundbreaking milestone in action filmmaking.

In Fallout we see McQuarrie and Cruise team up for a second time in the franchise, and this time they go bigger than any “Mission” has yet. Where most blockbusters seek to set the tone of their film by smashing together high-end VFX to get their audience engaged, Fallout chooses a more brisk, easy-going, and familiar path to calm the audience before the storm; that storm being a heart-pounding thrill ride for 120 continuous minutes with countless twists, turns, and stomach lurches that keeps the audience on the edge of their seats. That may sound unappetizing for those seeking substance underneath the style, but rest assured, McQuarrie takes care of the characters and the story with ease.

Many action films today become bogged down in lofty, weightless ambitions that never give action scenes true value in their design. Here, there are moments, albeit brief, where you can breathe easy, but those moments only enhance the spectacle. It’s something that few action films have achieved over the course of cinematic history, but it’s something that McQuarrie has excelled in both times. What’s most rewarding about Fallout, besides the outstanding setpieces and world class technical work, is the character work. Being the sixth film in the franchise, it’s hard to wrap your head around the idea that McQuarrie has found a way to continuously make the characters interesting. Many of the relationships we see have already been established and built, but there are always complications that blocks Ethan’s path to success, thus giving the audience newer dimensions to explore with the face of the franchise. That face of the franchise being the “method” in “the method behind the madness”, because Fallout’s action scenes are monumental.

Many films try their hand at a Halo Jump sequence, but none even come close to what’s accomplished here. Then, you think you’ve seen it all, and McQuarrie, Cruise, and the rest of the crew go one step and one punch further by channeling their inner Bond to deliver a brutal bathroom brawl, only to then be one-upped by a sequence in Paris that’s choreographed with such unparalleled precision that it makes any chase scene you’ve seen prior look like a walk in the park. There’s a slight hyperbole to that statement, but it’s that damn good, and I haven’t even mentioned the helicopter sequence. There’s so much happening within Fallout, but it’s all focused, directed, and choreographed in the most rewarding way imaginable. The action is superb, but without the finely tuned character work they simply don’t excel at the degree in which they do.

As you’ve read, Mission: Impossible – Fallout is everything you anticipated it to be, and then some. It was hard to envision a reality in which a film could rival George Miller’s Mad Max: Fury Road (2015) in terms of scale, artistry, precision, and stunt work back when it was released in 2015, but Fallout battles for the top spot.

In many ways, you can see that McQuarrie was inspired by Fury Road in how he uses diegetic or non-diegetic music to amplify tension. Lorne Balfe composed many boisterous and bombastic tunes for the film, but he always reigned it back in with soft, calming tracks to keep the tension and heart hand in hand.

Alongside that we see cinematographers Rob Hardy and Hugues Espinasse tighten their focus on each roar of a motorcycle or whipping of helicopter blades. The camerawork is constantly playing your heart like a drum, and Christopher McQuarrie guides it into the holy land of action films. Throughout the film you can see the utmost respect McQuarrie has for previous staples of the genre by sprinkling in homages to old Jackie Chan films, James Bond films, and works as recent as The Raid (2015). Recognizing that Mission: Impossible wouldn’t be where it is without the grandfathers of the genre.

Films like Mission: Impossible – Fallout are a once in a franchise type of achievement and it, like Cruise, are showing no signs of slowing down. It’s a harmonious action symphony for the record books that’s filled to the brim with death-defying stunts, layered character work, and a mountainous celebration of the Mission: Impossible franchise.