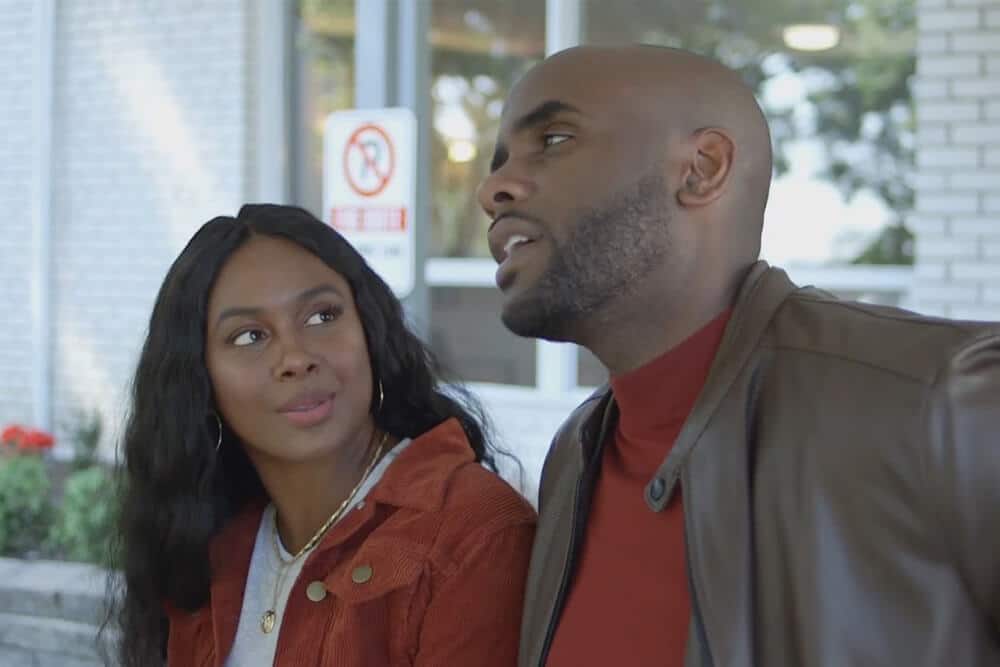 A year after it premiered at the Regent Theatre in Toronto, the team at Crossfield House Productions has made our Black Friday even better by making their film A Little White Lie available for free until December 1st, and we graciously accepted their offer.

Based their play of the same name, A Little White Lie is set in Toronto and tells the story of tech CEO, Michael Myers (Troy Crossfield), who is forced to face the skeletons in his closet when he finds out his mother only has a few months to live as she’s diagnosed with stage four cancer. In order to honour her dying wish, he enlists his co-worker Stacey White (Sheronna Osbourne) in a scheme to pose as his fiancée for the weekend. Arriving at his childhood home, he and his family must grapple with the deep, dark secrets they’ve been avoiding for years.

Written by Crossfield, Osbourne and Tazia Harris, and directed by Chris Chin, the film explores various relationship dynamics in the Black community, including men and women, girlfriends, brothers, mothers and sons, fathers and sons, and most importantly our relationship with ourselves. As these relationships play out on screen, we see the familiar real life narrative of Black families (and the main character Michael) sweeping things under the rug until everything comes to a head.

A Little White Lie, which skillfully walks the fine line between comedy and drama while addressing some very important issues, is refreshing for a few reasons.

First, because of the dynamic between the lead characters Michael and Stacey. Although the relationship starts off with a little white lie, the non-sexual intimacy and vulnerability expressed between a Black man and woman is a narrative rarely depicted on screens today. During one of the rare moments of truth, Stacey boldly states, “You need me”, letting viewers know that this isn’t a relationship based on perfection and superficialities but on loving each other through brokenness and hard times. The exchange oozes intimacy and sensuality without even one single article of clothing coming off.

Second, it’s not everyday that you see Black Toronto and the Black Canadian experience depicted on small and big screens in Canada. There’s a familiarity about this film, from the use of words like “Fam” and “Ting”, to Michael’s mother “playing her numbers”. What stands out are both the similarities and differences between the African American and Black Canadian experiences. The early scenes with girlfriends Veronica (Karen Simpson) and Nicole (Quinn-Marie Wilson) play out like a scene from BET’s Twenties and Sistas while still being distinctly Toronto. After watching this film, it’s clear that this aspect of Canadian culture is desperately missing from our TV and movie screens.

While the comparisons to Black films and TV productions in the U.S. may abound, I found the acting and realistic depiction of the Black experience in this film to be superior to that of some of the Black content we see on heavy rotation on American networks. Karen Simpson shines with her comedic acting, as does Quinn-Marie Wilson with her subtle eye movements and facial expressions that add authenticity to her character. Together with Sheronna Osbourne, these are three actors who we need to see more of in Canadian film and television.

Robert Ball is also a standout as a Victor, Michael’s slimy and shady business partner.

Similar to African American film and TV shows, A Little White Lie also explores faith, something that is important in many Black Canadian homes. Where it differs is that instead of faith playing a starring role in this film, it plays more of a supporting role as its balanced with imperfection, brokenness, and real life, where happy endings aren’t always guaranteed, avoiding the tendency to be cheesy.

In the end, we realize this film isn’t just about the lies we tell others, but the lies we tell ourselves in order to cope with our inner demons. At one point Michael rightfully notes “I don’t even know what’s real anymore” as both Michael and audiences wonder, “Who is he?” and “What is the truth?” even to the final scene.

A Little White Lie is available for free until December 1 at crossfieldhouseproductions.com.