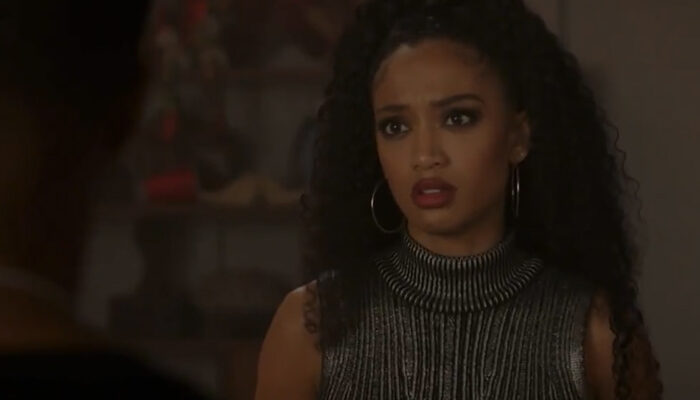 Tension is in the air as Liv and Spencer, and Jordan and Layla, figure out where they stand. We have it all in our All American season 5 episode 1 recap.

After months of anticipation, the season five premiere of All American is finally here!

Fans of the show have been asking for a Christmas episode for a long time and they finally got their wish. With the Christmas break, the Homecoming crew, including Simone, are in town leading to a crossover and some awkward encounters.

With the guys looking to host a party at the beach house, Spencer decides to take the lead in throwing the party.

Coop lays into both Spencer and Liv about being in limbo with their relationship. Spencer pays her a visit and invites her to the party. They miss each other after not seeing each for six weeks. Their interaction for the whole episode is heartbreaking. They clearly love each other but feel they can’t be together.

The Simone-Jordan-Layla love triangle is also heartbreaking. Simone walks into the Slauson Cafe and sees Layla, once again voicing her suspicions that something is going on between her and Jordan. She looks like a sad puppy dog throughout the whole episode.

When the party finally goes down, more awkwardness ensues. Simone and Jordan have a random uncomfortable encounter before Simone and Layla get each other for Secret Santa, exchanging sentimental gifts to congratulate each other of their successes.

Liv gets Spencer for secret Santa sharing a sentimental gift of her own. They share a long loving embrace that’s enough to make your heart melt, but the feel good moment is short lives as Spencer sees Liv is happy, thriving and living her dream when he’s not around. They’re still figuring out how to live their dreams without getting in each other’s way. Coop tries to step in and remind them how much they’re supposed to be together, but she gets shut down.

Meanwhile, things are continuing to heat up between Layla and Jordan. They share a few good moments throughout the episode. After his dad takes him for a second opinion on his hand injury and gets the all clear to play in the bowl game, he confides to Layla that he’s still apprehensive about getting back on the field. At the party they meet under the mistletoe. Do they kiss? You’ll have to watch the episode to find out!

There are also some secondary storylines brewing.

Layla’s beef with Clay is building up as he beats Layla in signing an artist she’s pursuing.

Liv’s investigation is ongoing as she sits down with her dad to share her concerns that Coach Garrett is giving his players bonuses to injure opposing players. Billy then shares Liv’s concerns with Laura intensifying the situation.

Asher and Coop’s friendship is also a highlight continuing from last season. Asher gives Coop advice on how to make herself more indispensable to Laura leading to a conversation about Coop wanting to pursue Law.

Overall, it was a great premiere. I know a lot of fans will have issues with the storylines, but the tension between Spencer and Liv, and Jordan and Layla, makes for great television. Both stories leave you dying to see what happens next.

Liv’s character is also showing growth after many fans didn’t like how her character was progressing. Where last season she was portrayed as being unlikeable, she’s now showing vulnerability and a desire to make things work. You leave tonight’s episode feeling like you want to root for her again, both in her story about Coach Garrett and in her relationship with Spencer.