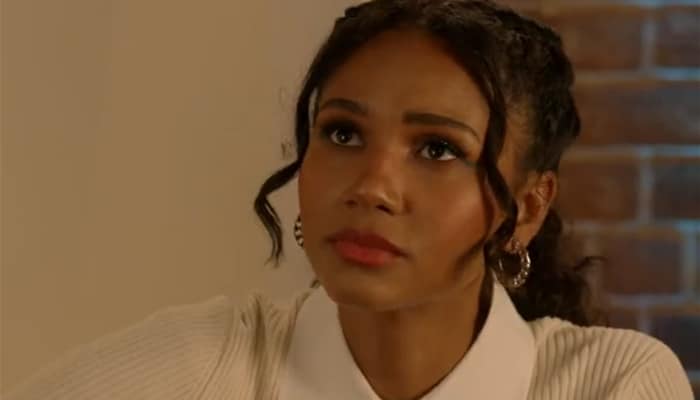 It’s Valentine’s Day! Spencer and Alicia go out and Jordalya is having early trouble. Here’s our All American season 5 episode 5 recap.

The episode opens with the press conference announcing recruitment for the season. Jordan talks to Spence who feels bad for Coach Boone in light of the truth about Coach Garrett coming out. Spencer wants to tell him but Jordan reminds him of the goal.

Jordan: “This is the calm before the storm… storm is coming”

Liv feels her article is missing something. Billy is proud of her and the article she’s written. She’s still looking for a final detail to add.

JJ’s frat does an annual speed dating event which JJ agrees to host. He asks the boys to be a part of the event, asking why Jordan would turn down dating, especially since he’s single. He then agrees and immediately goes to tell Layla that JJ has figured them out. Jordan then tells her that he has a big night planned and Layla is clearly uncomfortable. She would rather a cheesy romantic comedy night.

Asher’s back and gives a tour of Coastal to Jabari. Asher is still on JJ about not practicing with JJ finding out that Jabari is there for his position.

At the speed dating event, Spencer meets a girl who’s into ghosts. Obviously he’s not feeling it. Jordan meets a few girls clearly into him for his looks and physique and one with a foot fetish. JJ questions Asher’s choice about Jabari. Jordan and Spencer tell him the truth about how he’s been acting. They tell him, “You quit on Ash.”

This leads to a talk between JJ and Asher. Asher tells JJ he doesn’t make good choices. JJ tells him, “I’m going to work harder” to which Asher replies, “I’ll believe it when I see it.” Well, that’s short lived when JJ gets invited to a party by his frat and ditches practice yet again. He’s just not serious!

Back at speed dating, Spencer is told by one candidate that his ex (Liv) is his side chick because he hasn’t told Alicia about his time with her. Jordan confesses to JJ that  he and Layla are an item. JJ agrees to keep the secret and tells Jordan to go figure out what he and Layla are.

Coop and Spencer chat at Slauson where Coop asks what he has planned for Valentine’s Day. He wasn’t planning on anything but Coop tells him to go big like Pretty Woman. She asks if Alicia and him like each other and reiterates going big. Spencer takes Coop’s advice and watches Pretty Woman, taking notes for later.

Still on a quest to become a lawyer, Coop goes to GAU to fight for one of three spots as an auditor in a law class. She meets Professor Hill, telling him about her life. He questions whether she will leave law for another dream like she left music. She feels intimidated and backs out of the fight for the spot.

Later at the office, Darius is prepping for the case since the judge is deciding whether Preach gets to keep Amina. Coop drops off some checklists to make sure everything is done but when Darius forgets a key piece of information, it costs Preach the case. Preach is livid and is upset with Coop since she promised she would take of it.

Back at Laura’s Law, Coop gets upset and takes her frustration out on her. She says her life prepared her for this law path and for her, school wasn’t it. She asserts that she knows what to do and declares she’s back on the case. She then goes back to Professor Hill to reintroduce herself. She was ashamed of her GED and her life that got her shot. She shoots her shot but is prepared to come back next semester.

Finding her missing element, Liv tells Billy what she has found out―11 assistant coaches in five seasons all quit. Bounties were brought in after one the coaches quit just four days before a past season. After his departure, the bounty hits increased. The coach in question, Eric Braun, turns out to be a former team mate and friend of Billy’s. Billy forbids Liv to go and see his former teammate and says he’ll do it (and we thought Billy was finally ready to let her grow up).

Our favourite couples Spelivia and Jordayla (not really my personal fav but anywho) have a not so Happy Valentine’s Day after all.