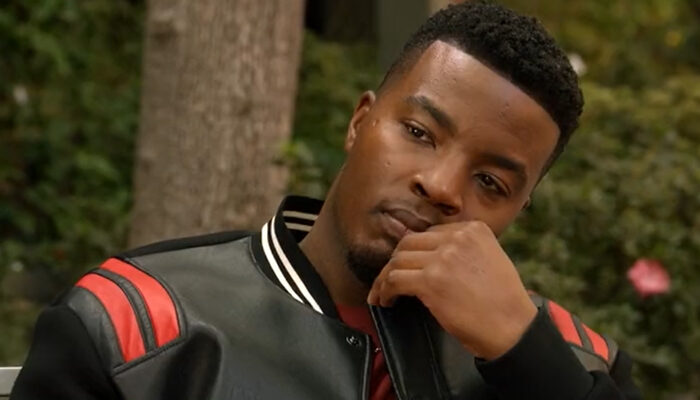 Liv might be regretting her article and with Coach Garrett gone, Jordan considers his options for his future. Here’s our All American season 5 episode 7 recap.

The episode opens with a press conference—four days after Liv’s article drops. AD Barnes reiterates that Garrett is a bad seed and doesn’t reflect what GAU really stands for. The team is distraught and upset with “Jayden Davis” for releasing this article. With uncertainty ahead, the team splits and many are lost.

Liv is feeling guilty about her article. She’s receiving praise from her friends (finally) and her co-workers, but can’t shake feeling responsible for what’s happening. After a chat with Mama Laura, she finds the courage to talk to Spencer and Jordan.

Patience reaches a milestone for followers, but is fighting for her life in the comments. Turns out one of Clay’s artists is coming for her. Layla confronts Clay and Patience is forced to apologize for her behaviour.

Skye is back as Coop starts school. It’s her first day in her law audit class and she leads with her opinion leaving her shot down by the prof. Later, Coop is reminded that her passion is not all that matters, but she needs a plan.

Mama Grace is also back bringing food and wisdom. Spencer wants to speak to AD Barnes and Grace suggests calling Billy because of his connection to Crenshaw. Spencer feels he can’t fight for his future alone. He talks to Grace and she encourages him to talk with Jordan about their future.

Jordan gets a surprise call from another college and shares that news with Asher who uses that opportunity to tell Jordan that Coastal is also interested in him. He helps Jordan see that he should look at other options. Jordan ponders his journey and finds that a change may be needed. Jordan, who was dodging Spencer all day, finally talks to him telling him about his options. Jordan is looking for “his guy” like Spencer has Coach Kenny. He encourages Spencer to keep his options open and remember the NFL dream.

Billy and Spence speak to AD Barnes pushing for Kenny to become head coach. Barnes is receptive leaving Kenny feeling optimistic. In the end he makes an unsuspected offer.

This mid-season finale brings some sad moments, some cute moments and some big decisions. Looking forward to what the rest of the season holds for our favourite college kids.

All American returns in the New Year on The CW.