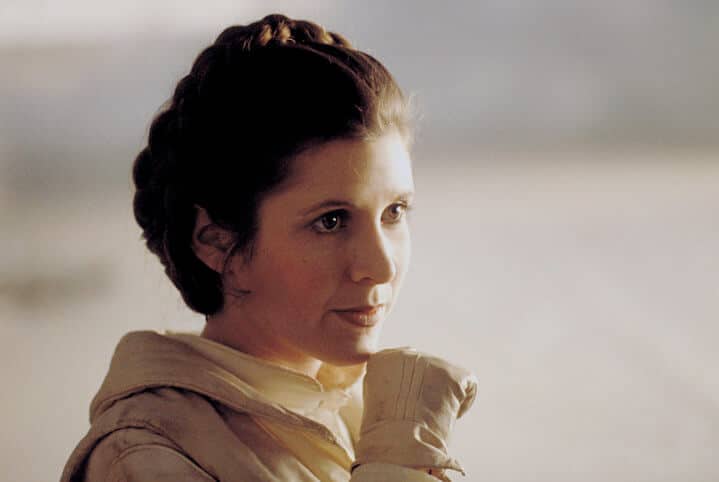 5 OF THE MOST BADASS FEMALE CHARACTERS OF MODERN CINEMA

Over the past few years, we have seen how women have taken on the role of leading ladies on the big screen. These heroines have exemplified courage, bravery, intelligence, and a whole lot of sexy! What a combination! These ladies certainly don’t sit on the sidelines, no: They kick some serious ass! It’s encouraging to see strong female role models in cinema that young girls can admire for reasons other than having long hair and wearing sparkly dresses. Personally, it makes me proud to see when a strong woman being able to hold her own through battles challenges and tribulations. If there is one thing that the five ladies on our list have in common, it’s that they fight hard, and don’t need to rely on anyone! There’s no stopping them!

Ah the beloved Princess Leia! Portrayed by the late Carrie Fisher, Leia is certainly a badass in every way. For one, she’s sharp witted and also demonstrates a strong sense of leadership throughout the entire saga. Leia doesn’t need a man to carry her through…although who wouldn’t want to jump into the arms of Han Solo eh? She means what she says and takes charge . As beautiful as Leia is, she doesn’t have to rely on her looks to get men to respect her. Those quirky, quick witted comebacks are just a part of her character’s charm. Devoted to her cause, Princess Leia also embodies the virtues of kindness, courage and generosity. As a leader in “The Rebellion”, she inspires women and men to great things. And also who could forget that hair?Slay Princess!

Katniss Everdeen is one kick-ass lady! There are many qualities I admire about her, but I have to say that this girl knows how to keep herself going, even in the most hopeless of predicaments. Katniss has experienced much hardship over her lifetime and somehow she always pulls through, even at the cost of several scars. She has witnessed her loved ones being murdered right in front her, been (literally) thrown to the bloodiest fighting pits, inspired a rebellion and still remained true to herself. She’s even faster and stronger than her competitors during the hunger games. That being said, she is not a cold and silent woman. Katniss is not afraid to show her extremes of emotion and that’s what makes her great! She builds herself upon anger, sadness, war, destruction, leadership, sheds many tears and demonstrates vulnerability. She carries hope within her even the world itself is hellbent on breaking her. LEt’s not forget that she is also a skilled fighter (she is indeed quite gifted with her bow and arrows and a talented tracker). In one of the most iconic moments in “The Hunger Games” franchise, Katniss demonstrates the sacrifices she’s willing to make in order to save her loved ones. Talk about a girl on fire!

Not your typical looking leading lady, but nonetheless, that’s what makes Gamora a top contender. This green skinned superhero has tremendous fighting skills and isn’t afraid to show it. She knows how to hold her own as a fearless assassin and shedoesn’t let anyone get in her way, not even Thanos! As tough as she seems, Gamora has a moral compass and does what’s right. Although she puts on a tough front, which makes it difficult for others to break down her emotional barriers, she does demonstrate empathy towards her sister Nebula, who is constantly attempting to kill her. Gamora doesn’t let a man, let alone, romance stand in her way. I love how she leads the action in Guardians of The Galaxy which can a be a rare occurrence in films. Gamora is a true fighter who kicks even more ass in Guardians of the Galaxy volume: 2!

Out of all of the contenders that I’ve listed so far, Furiosa is arguably the most bad-ass of them all. In Mad Max: Furiosa is a war rider and at the head of command. She is a leader, a risk taker and doesn’t take anyone’s crap. Despite coming across as a lone wolf, she forms an alliance with Max Rockatansky and starts fighting to defend those in need. Furiosa is compelled by anger; she thrives off of her own emotions based on her hard past which fuels her eagerness to save others even more so. This chick is the real deal!. I love how determined and intelligent she is. What I also love about Furiosa’s character is that she is a real hero. She risks it all to do what is right which sets her own path. She is also a survivor. And even though Furiosa is surrounded by she is the one in charge. Oh and did we mention that her mad driving skills outmatches everyone else’s and that she does so with a mechanical arm? She’s got it all!

In case you haven’t heard there’s another female heroine coming to town on June 2nd. She came to kick ass and chew bubblegum…and she is all out of bubblegum. Personally I believe tht Wonder Woman outshines superheroes such as Batman and Superman simply due to her fierceness. Wonder Woman or Diana Prince, is a self assured Amazonian Warrior Princess. She is skilled at combat and although many of us are familiar of Wonder Woman’s portrayal in the comic book world, I’m very much looking forward to the Wonder Woman film. There are a few things we can already concur about Diana Price: she has super strength, she carries a sword even though she can beat her enemies with her own two hands when necessary and wields a lasso that compels men to tell the truth! Need I say more? Futhermore, hers will be the first female lead superhero film and will hopefully inspire other studios to do the same with their properties.

I have to say how pleased I am that more female action heroes are taking their turn in the spotlight. I t makes me proud to see these heroines taking the lead as oppose to being secondary characters standing on the sidelines. Growing up, my main role models were classic Disney princesses who had their own individuality, however in most cases, it was a prince who showed up, saved the day and rescued them. Typical! As times have changed so have our expectations. Therefore, I’m expecting more badass ladies to pave the way as positive role models for young girls and it makes me proud to be a woman!

What heroines do you admire and why? You can let me know in the comments below.