FILM REVIEW – BIRDMAN or (the unexpected virtue of ignorance) 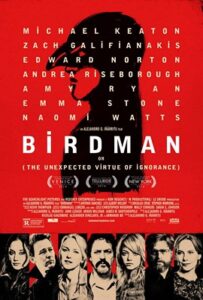 Birdman or (the unexpected virtue of ignorance)

Birdman stars Michael Keaton as Riggan Thomson, a washed up actor who played a popular superhero in his prime days twenty years before the movie takes place. The film carries us into the series of events and challenges that Thomson has to face as he attempts to direct, write and star in a Broadway play. His goal is to regain his long lost fame and popularity despite his family and friends telling him to give up on what seem to be the desperate ventures of a nostalgic man.

Directed by Alejandro G. Inarritu, the movie is classified as a dark comedy as it explores depression, loneliness and hope in its own humoristic ways. We are given some powerful performances by supporting actors such as Emma Stone who plays Riggan’s daughter “Sam” and Edward Norton who portrays Mike Shiner, a stage actor facing many demons.

We can see why Birdman is the winner of four Oscars (including “‘Best Picture” and “Best Director”). This film is a masterpiece and is highly recommended to anyone who is into this genre. Michael Keaton is incredible to watch on screen and he will keep you entertained until the very end.
(Warning: Coarse language, drug and alcohol reference, mild violence and sexual references).

*”Birdman or (the unexpected virtue of ignorance)” by Source. Licensed under Fair use via Wikipedia