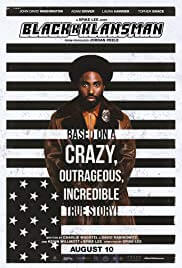 Written and directed by Spike Lee (Do the Right Thing) and based on the novel Black Klansman by Ron Stallworth, BlacKKKlansman stars John David Washington (Ron Stallworth), Adam Driver (Flip Zimmerman), Topher Grace (David Duke), and Laura Harrier (Patrice Dumas) in a story about “some fo’ real, fo’ real shit”. It’s a story where rookie detective Ron Stallworth leads the investigation of a local Ku Klux Klan chapter in an attempt to get closer to the Grand Wizard of the Klan, David Duke.

Anyone familiar with Spike Lee’s work will recognize the stylistic techniques Lee brings to every joint. Anyone unfamiliar with his work, will instantly want to explore his filmography further to discover what kind of voice Lee brings to the medium.

BlacKKKlansman opens with hilarity and true terror that you’ll see throughout the film. The first scene is an instant tone setter, and Lee only goes further to utilize past events to express anger towards the present day horrors we currently see everyday. There’s no subtlety here, but that’s because the film plays more like a documentary and less like a typical crime drama. Lee never shies away from expressing his anger through tilted frames, signaling an unbalanced society. Early and often you may find yourself saying that BlacKKKlansman is “more of the same”, but there’s an obvious voice behind the camera. Periodically, it feels like Lee is trying to break the fourth wall through eerie dialogue and brash visuals plastered in American households, but it only furthers the point he’s trying to make. This may turn a few people away, but in sticking around you’ll see what game Lee is trying to play.

In this day and age, we see many films that are nothing more than “escapism” (*notice this weekend’s competition, The Meg*). In BlacKKKlansman Lee excels in presenting a film in ways film was intended. Instead of romanticizing or “Hollywood-izing” true events, Lee uses the big screen as a ginormous mirror for the audience to listen, feel, reflect, and engage with a motion picture; to reflect on one’s self and the role they play in America, and to reflect on current events that are plastered all over the news. Many characters embody specific demographics respectively and no one is safe from real criticism, although it’s less constructive and more provocative. It’s what cinema has been and always will be, and Lee uses a few classic films to showcase exactly what he’s trying to accomplish here, and it works.

Lee working through his actors to make them appear as more than just stand-ins for the actual people caught in these events was something that stands out the most. John David Washington (son of the iconic Denzel Washington) and Adam Driver are the standouts here in a lightly glazed partnership. Sufficient time isn’t taken to develop the camaraderie, but it isn’t exactly necessary as Lee believes in his actors enough to allow them to flourish in shorter, more intimate moments. Other directors would want to build the world around that bond, but Lee dedicates his time to the world first so the character’s feel more palpable. Set in 1978, the music grooves and the streets rumble with quiet riots and it gives the film a pulsing, violent aura allowing Lee to implement a surplus of his stylistic flourishes. Chayse Irvin’s photography partnered with Terence Blanchard’s score elevates the atmosphere of BlacKKKlansman and it assists in allowing Spike Lee to use his cinematic voice to speak to the audience.

Without spoiling the film’s waning minutes, Spike Lee makes a bold, powerful, and inspiring decision. It will piss people off no matter which side of the argument they may fall on, but it leaves a soul-crushing impression as it fades to black.

In BlacKKKlansman we see a black man infiltrate hate by becoming the first black police officer at the Colorado Springs Police Department. He faces an immovable adversity at first, but showcases strength and a lust for greatness to become an undercover officer. Then he proceeds to infiltrate one of the largest, most vile hate groups in the history of the world, and shares many conversations with the leader. Many of these scenes see Ron Stallworth playing David Duke like a fiddle and it garners the film’s biggest laughs.

BlacKKKlansman, and the story of Ron Stallworth, is empowering and showcases how much of a true American hero Stallworth is. Fighting hate by infiltrating it, with all the odds stacked against him, is one of the bravest acts in American history. Lee understands there are stories to be told about the people of this country who need a voice in speaking truth to power. It’s a timely story, an important story, and a story that will get you to feel like you’ve only been complicit to the true horrors that take place against an oppressed people everyday.

Cinema is inherently political and Lee utilizes this as it should, evoking emotion and feeling, and deliberately does this in an explosive manner. It flexes all of its muscles to transfix the audience into realizing that America hasn’t changed as much as we think it has, and the mirror only reflects bigger, more terrifying horrors every day.

BlacKKKlansman is a film by the people, for the people, and an outing that showcases that the American flag doesn’t belong to any one people, but all people.