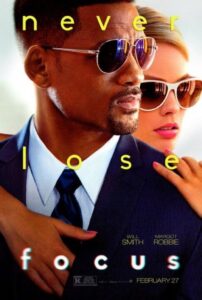 “A consummate con-artist takes a glamorous rookie under his wing, but she steals his heart. Perhaps love is also a con-game.”

After starring in a series of unsatisfying movies, Will Smith is now on a journey to win back his audience’s attention. Following After Earth, a film worth forgetting, Smith uses his charm and charisma to regain his dwindling popularity amongst moviegoers. Has Focus succeeded in doing so?

Directed by Glenn Ficarra and John Requa, Focus follows Nicky Spurgeon (Will Smith) as a smooth con artist who takes on his newfound interest, Jess Barrett (Margot Robbie, The Wolf of Wall Street), as an apprentice.

The film initially leads the audience in a series of heists and elegant maneuvers that are exciting to see with characters that are entirely captivating. Unfortunately, the film quickly loses focus – no pun intended – when it attempts to take on a dramatic style after the first act, all the while utilizing elements that work against the initial storyline.

Although the story has cause for review, the two lead actors still manage to give us strong performances. Fans of Will Smith will breathe a sigh of relief with his highly charismatic approach to his character. Likewise, although she is new to the big screen, Margot Robbie is proving to be a talent worth looking out for.

Should you pay to see Focus in theaters? Not really. But for what it’s worth, you might want to catch it on Netflix when it becomes available.