Vladimir Jean-Gilles recently sat down with Chilean filmmakers Silvio Caiozzi and Edgardo Viereck ahead of the Canadian Film Institute screening of their film …And Suddenly the Dawn (…Y de pronto el amanecer) at the Ottawa Art Gallery. They talked about the creative inspiration for the film and Caiozzi’s long-awaited return to the director’s chair.

Vlad: So for starters, the first thing I wanted to talk about is in regards to the filmmaking process – the pre-production side of it, how the two of you got connected to make this film, and what exactly inspired you to put that together.

Silvio: Well, with Edgardo, in my last film, we worked together. From the beginning, Ed was in charge of executive production of the film. So we made a very good team. And how the film came to life, it was sudden. I met writer Jaime Casas. He was born in the southernmost part of Chile and he wrote his books and short literature novels about what he knew when he was a kid and teenager; about the life and the atmosphere and the culture of that part of the world and the southernmost part of the world. I love that! I love all his books, all his writings. But I couldn’t find a main character, a main line that could develop a story for a film. So together, we developed the main character, which is an old writer that comes back to this type of world at the end of his life. So this is a very funny way of making a script. It was inspired by many different stories and characters portrayed in different types of literature he wrote. And with all that, we managed to create this main character that combines the relationship with his other stories and his other characters. Very interesting character, beautiful themes altogether into the development of what is going on at the end of his life.

Edgardo: When I received the project, we had a little bit of work in terms of budget. But I discovered that the first actions we made, we had to spend a lot of time talking with local people.  We tried to get not only money but help. A lot of help was necessary. Not only placements. Logistical help, locations, casting. In the film, you can see more than 700 people. It was a lot of work. I mean, we spent more than 3 years in the pre-production. 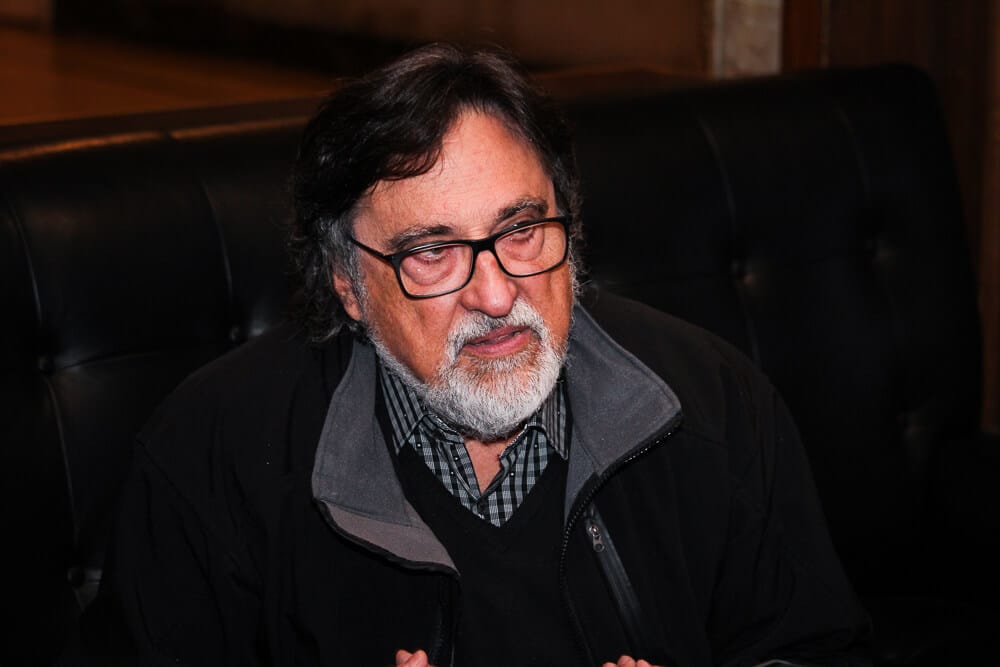 Silvio: This is a big, big film. Very big film. And if it wasn’t for the help we got, we couldn’t have made this film, simple as that.

Vlad: How did you guys manage to navigate through the multiple types of storytelling in this film because just based on the trailer, based on the footage that I’ve seen, this film seems to be tackling ideas, some of it is fantastical, some of it is personal, some of it is dramatic. How are you able to navigate through all these themes? Is that something that you went on as you directed the film or did you already know where exactly you wanted to take everything, because a lot of times the filmmaking process is simply a journey?

Silvio: I always work with a very strong script. I don’t start shooting until I’m absolutely convinced on the script. So I don’t improvise it. So the script was very difficult to make because of the challenge we adopted with Jaime Casas, the writer. The challenge was huge. How to develop a script that deals with the present and at the same time, it deals not with a flashback (not really with the past), but what the author is imagining about his past.  In other words, what you see is not flashbacks of the past of his place. What you see is his imagination as a writer. So some people have said, “Your film has a lot of magic literature, the Latin American magic realism.” And it does. It’s because we enter into the mind of a Latin American writer, therefore imagination of magic realism is right there. So the challenge was huge. We were afraid that nobody would understand the film. And it’s not so. Everybody understands the film. Finally, we managed to make a script that is very entertaining because many stories are developing and all of them are connected with what is happening to this writer. You know? Going into his mind as a writer and into the present. So, I think we were very lucky because people from many different countries feel the same emotion with the film. The film has won awards in many different countries. In Montreal, it won Best Film at the Montreal Film Festival.

Vlad: How did you feel when you saw the success that the movie generated, not just in terms of awards but you’re already an awarded filmmaker? You’ve already done so much work. Your work has already been so well accepted in many countries.

Silvio: You know, for me, it’s the biggest happiness of my life. I’ve been very lucky, you know, with all my films. I’ve won awards. Also, I’ve won the Best Director Award with coronation. But with this film, I’ve received the feeling of the audiences throughout the world, even China. I’ve shown the film in Beijing and to me, you know, I’ve was always very scared. What would Chinese people understand about Latin America or Chile? Zero I said. What was going to happen? Amazingly, they felt the same things everybody felt. Same exact thing. The audience came out with the same emotions. So that was for me the happiest thing in my life, to feel that work you have done can go across borders. In a sense, feel that the people can experiment with the same feelings throughout the world. That for me is a big gift.

Vlad: Now something else that I’m really curious about. Your last movie, Cachimba, was in 2004. And now, it’s 2019 and you’re back in the filmmaker’s chair and the world of cinema has modernized and changed a lot since the last time you directed. What was it like coming back to film after the hiatus and what was the inspiration like when you came back to your element and interacted with this world that you first fell in love with?

Silvio: For me, this is not very special. I feel like I have to be absolutely in love with the film, with the characters. I have to have them in my mind. They have to wake me up at night. It happens to me. And that doesn’t happen very often. So I don’t film just for the sake of filming. In Chile, it’s a big challenge. You don’t film to become a millionaire at all because you practically have a very small market there. So actually, when I decide to make a movie, it’s because I cannot stop making it. Because I’m so much in love with it. I can’t stop it really. And that happens to me once every ten years.

Scene from Silvio Caiozzi’s “…And Suddenly the Dawn”

Vlad: You seem to really have a profound love for the craft and you as well, it seems like you take on cinema with the same type of love and the same type of respect. Your last project, if I recall correctly, was in 2010. Do you take on a project the same way? Do you wait for this inspiration?

Edgardo: At first, I’m not a producer in professional terms. I produce for Sil because I love his films; I love his ideas. How to approach the creation process. This film tackles the feeling of the creative process on how the memory works. Memory, creative process is a mystery. How can you build up from the original idea to the script and then to the footage, the final copy? It’s how you can rebirth no matter how old you are. It’s about rebirth. And that’s very important in this world, in this era. There’s a lot of people that want to see that feeling on the big screen. Not action film, not violence. Real emotions.

Vlad: It’s an inspiration for your own creativity in a certain way, too.

Silvio: Now, I can perhaps tell you why I was so much in love with this theme, with that character, with what happens in the film. I can tell you now that it’s probably because I feel that this world, that this generation believes in nothing. It’s a terrible world, really. So, the only thing left to believe in is in yourself. In the human being, okay? So, the film shows you how a person, no matter at what age, when he goes back to his life, he starts discovering that he made a big mistake of not doing throughout his life what he loves to do. He loves to create something important, create novels. But what happened is that he has to escape and became a comfortable man. He married a woman with money, started writing funny things for unimportant newspapers and magazines, some show business type of thing. An easy way of life. But obviously, deep inside of him, something was lacking all his life. He wasn’t conscious of that. But at the beginning of the film, he goes back to his past actually. So he starts discovering by remembering and trying to make these little funny stories about this end of the world situation. He starts discovering what happened to him. That he really lied to himself. He really didn’t work on developing what he really wanted to do in his life. So at the end of the film, he’s sure that he will be able to make a great novel now. In other words, a man, no matter what age, has the opportunity to really rediscover himself, be born again, let’s say, and start living well and happy because he now can do what he really feels like doing. So, I think one of the biggest answers today is go into yourself and find yourself. What is good for you to do and do it. No matter how painful it could be, do it and you’ll be happy.

Vlad: You know what? Surprisingly, though it is the story of an older man, I find that this is a story young people could benefit from a lot. Especially when you’re at that stage of life where you’re still searching for yourself. Did that occur to you at any point?

Silvio: No, and I think that is the secret of why this film, all over the world, has received such a success with the audience. I mean, the people feel it, they become emotional, they become identified with it because, as you say, even young people feel something there that they are sometimes missing and are discovering throughout this film. So, that’s why I’m very happy.

Vlad: Well, thank you very much both of you for being here and thank you for making this movie. I think it’s a very important movie for the day and age that we live in. And I do what to encourage you to keep displaying that kind of inspiration on screen. Silvio Caiozzi, it was a pleasure!

Silvio: Great! Thank you very much!

Vlad: Edgardo Viereck, thank you much!