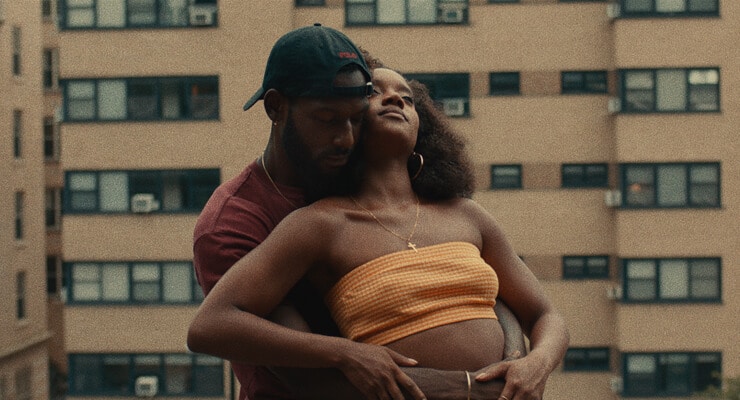 Artist and free spirit, Isaiah Maxwell (played Kofi Siriboe) is busy navigating Washington, DC’s competitive arts scene until he meets Georgetown law student Stevie Richmond (played by Yootha Wong-Loi-Sing). Together, they go on a journey of fulfilling their dreams and ambitions, all while cultivating their blossoming love.

Rounding out the all Black all-star cast are Michael Ealy, Uzo Aduba, Mack Wilds, Naturi Naughton, Blair Underwood, and Suzzanne Douglas who passed away in July after a battle with pancreatic cancer.

The 2020 film, which was recently released on Netflix, is refreshing for a few reasons.

First, the film is set in Washington, DC which typically plays a prominent role in political dramas and thrillers. DC has one of the largest Black communities in the United States which is rarely depicted on the big and small screens. It is refreshing to see a whole other side of Washington, DC’s culture on-screen and, on top of that, to see a Black film not set in New York or Los Angeles.

Second, it follows the growing trend of depicting real Black love on-screen, seen in films like The Photograph (2020) starring Issa Rae and Lakeith Stanfield. These films are a part of small but growing list of films that show Black people in positive, normal and loving relationships that will resonate with mainstream audiences. Really Love presents Black people as human and loving in a time when stereotypes surrounding angry Black men and women still loom.

The film also stands out as it is centered around high art which plays a supporting role in the film. From the jazz-infused score and Stevie taking in a contemporary ballet with her parents, to Isaiah’s art, this film screams Black Excellence, drawing from the Cosby Show playbook. There are no aspiring rappers or athletes―just a budding painter and am aspiring lawyer trying to work it out. Underlying their pursuits is a familiar story of the pressures Black people sometimes face in living up to their parents’ expectations, including a good job and education.

Finally, the film is also refreshing in its casting. While some films tend to cast lighter skinned men and women to appeal to mainstream audiences, the casting of Kofi Siriboe and Yootha Wong-Loi-Sing in the lead roles is a celebration of Black beauty. Wong-Loi-Sing is especially a deviation from what we’re used to seeing in Black women in film. She’s a natural woman who somehow looks African, Caribbean and American all at the same time. She’s all Black women in one; the quintessential Black woman. Without even opening her mouth she exudes strength, vulnerability, and passion.

Although the film is set in DC, it feels like a “coming home” moment for Black people and a window into everyday Black life for everyone else.

While the ending leaves a bit to be desired, the film tells a very beautiful and important story that we need a lot more of. It is smart, passionate, and a universal and human story all viewers can connect with.

Really Love is available now on Netflix. Click the header to check out the trailer.