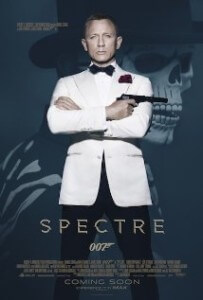 Shortly after the events of Skyfall, M battles political forces to keep the double-0 program alive. Meanwhile, Bond, after receiving a cryptic message from his past, peels back layer after layer of deceit to reveal the truth behind the sinister organization known as SPECTRE.

One of the most anticipated movies of the year has just hit the big screen, and it features everyone’s favourite suit-wearing, Aston Martin-driving super-spy, this time on the trail of an organization responsible for multiple acts of terrorism around the world. After a few run-ins with some old friends and new enemies, Bond, played once more with style by Daniel Craig, finds that SPECTRE is much more than it seems. Unfortunately, the same can’t be said for some parts of the film—but more on that later.

The film opens with a great five-minute long take that follows Bond through the streets and rooftops of Mexico City. It isn’t the last we see of cinematographer Hoyte van Hoytema’s stellar work: top-notch shots and innovative camera angles are everywhere, providing added impact to the calmer scenes and making the action sequences both thrilling and easy to follow. This works well with Thomas Newman’s score, which reminded me a little too much of Skyfall at first but set itself apart through effective use of vocals over strings. The credits sequence, though impressive and featuring more octopus imagery than I thought I’d ever see in a Bond film, didn’t change my opinion of Sam Smith’s contribution to the series, “Writing’s on the Wall.” The music is gorgeous and haunting, but the lyrics are simplistic and make little sense in some parts.

Spectre features a star-studded lead and supporting cast that is, for the most part, either underused or inconsistent in tone. The new “Bond girl,” Madeleine Swann, is played by French actress Léa Seydoux, who pulls off the look and feel of the character with aplomb, but the romantic subplot that inevitably inserts itself between her and 007 feels almost rushed. Meanwhile, Christoph Waltz’s acting talents and amazing delivery are bogged down by an underdeveloped script and a villain who spends too much of his time focusing on the past; Dave Bautista’s strong, intimidating presence shines during the action scenes but his lack of lines relegates him to little more than the main henchman; Monica Bellucci’s relation to a minor character puts her in only two short scenes, which leads me to question why she was chosen specifically; and Sherlock alum Andrew Scott is the centerpiece of what is essentially the plot of Mission Impossible: Rogue Nation, but involving MI6 instead of the IMF.

Overall, Spectre is a visual and technological thrill ride not to be missed by any action fan, but a subpar script, underused cast, and inconsistent tone keep it from reaching the level of quality attained by previous entries in the series.