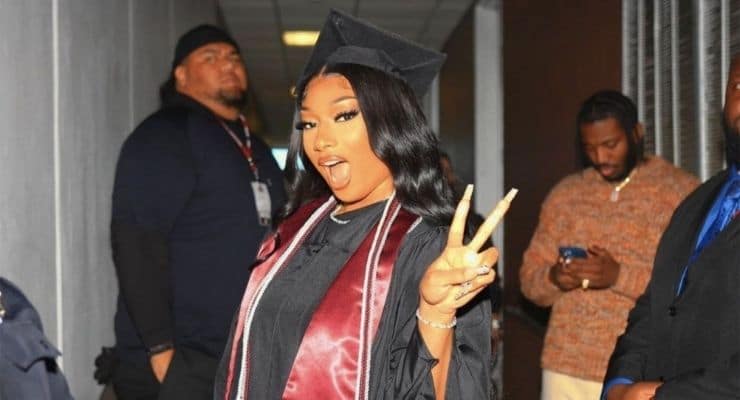 “I want y’all to remember that you can do whatever you wanna do and be whoever you wanna be, cause look at me.” – Megan Thee Stallion

Graduating from Texas Southern University with a bachelor’s degree in health administration, Megan Thee Stallion proves to the world that anything is achievable if you put your mind into it.

This mindset is why Nike selected Megan Thee Stallion also known as Megan Pete as a Yardrunners, a Nike lead program dedicated to shine a light on students from historically Black Universities and Colleges (HBUCs) who are creating meaningful change for Black communities.

“I want y’all to remember that you can do whatever you wanna do and be whoever you wanna be, cause look at me,” the alumnae wrote in a recent post.

For the past 7 years Pete has been working on completing her college degree while building her career. The three-time Grammy winner has been recognize for breaking several records such as most streamed song in the first week, first women to hit number one on the rap songwriters chart and first female number one rap collab in the U.K. for her single WAP with Cardi B.

She shares on the recent #ChoachConversations with Angie Martinez, that her journey to getting here wasn’t always so easy. “Sometimes I would be in class thinking about music,” she says. “You can’t get lost in the turn up. It can get real fun out here sometimes, but you have to whirl yourself back in.”

The Texas native, was encouraged by her grandmother to complete school, as she always saw her mom take care of her grandma with no senior assistance education. Recognizing that the care her mom provided was lovely but may not have always been professionally advised, she plans on opening assistance living facilities around her hometown, Houston, for seniors to receive the professionals care they need. 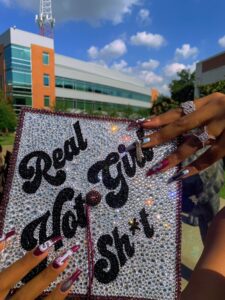 Wearing her “real hot girl shit” mortarboard hat with pride, she reminds young women around their world the value of having your own education while re-contextualizes the meaning of a “hot girl.”

Brehanna Daniels, another 2021 Yardrunner and NASCAR pit crew worker, says “If you work hard, everything you do you work hard, you don’t half ass, your hard work will eventually start to pay off. It just pays off. If you don’t cheat yourself, you don’t cheat the grind, and you just do you no matter what anybody has to say, even though there are people that’s doubting you, use that as fuel to the fire to get yourself better and to prove them wrong.” Daniels graduated from Norfolk State University with a Bachelor of Communication and went on to become the first every African American female NASCAR tire changer.

It is no secrete that post secondary can get very expensive very fast. From college prep process to admissions and tuition, the economic racial gap that some Black and Hispanic experience can add an additional barrier to aspiring post secondary students. A 2018 report by American Progress, found that there would be 15,000 more female educators if Black and Hispanic women received degrees at the same rate as White females between the years 2013 to 2015.

It’s reasons like these, why Megan Stallion launched a scholarship in 2020 for women of colour pursuing an associate, bachelor, or postgraduate degree in any field worldwide. Naming it after her song with Young Thug, Don’t Stop Scholarship Fund offered $10,000 to two women.

COLLEGE HOT GIRLS THIS ONE IS FOR YOU SO LISTEN UP??? IM GIVING AWAY 2 10,000 SCHOLARSHIPS TO TWO WOMEN OF COLOR IN ANY FEILD OF STUDY ‼️‼️‼️ APPLY NOW #DONTSTOPSCHOLARSHIP https://t.co/NpSUEEDKdm pic.twitter.com/6A93IcnXzQ

Earlier that year she also offered a scholarship to a student attending Long Island University studying in the School of Roc Nation for Music, Sports and Entertainment.

In a press release the 26-year-old said, “I still have academic goals that I want to achieve, so if I can use my resources to open doors and create opportunities for at least one student, then it’s a victory. It’s important that we encourage our students to pursue their passions and put them in positions to become the next game changer in whichever fields they choose.”

It is a similar sentiment that Nike’s Yardrunners fan gear honours. The collection celebrates community and the power of self-determination that cultivates changemakers. The gear can be found in selected stores across the US and online.

“(University) really exposed me to what I could do as a business leader,” said Solomon Mangham, a Yardrunner alumnus, Basketball player and beverage owner. “I think coming from Howard I have no fears of nearly anything professionally. I think I just want to be in a position where I can expose a lot of black people and specifically black athletes to different options that they have in life.”