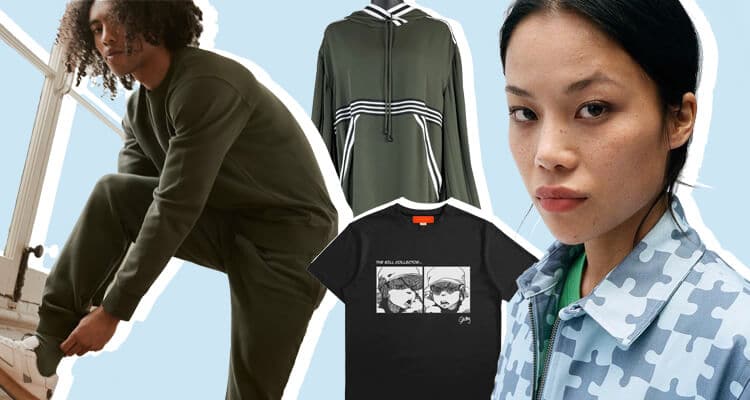 Montreal has not only built a reputation as Canada’s fashion centre. SHIFTER’s Avah Taylor takes a look at 10 dope Montreal clothing brands you need to know.

From streetwear to ready-to-wear to haute couture, Montreal is a city of a style and a world-class shopping destination for fashion lovers from around the globe. Arguably the fashion capital of Canada, the city has become a hot spot for emerging designers and up-and-coming brands throughout the years. Here are 10 Montreal clothing brands you need to know about after the jump.

Frank + Oak was founded in 2012 by high school friends Ethan Song and Hicham Ratnani. Both men obtained degrees in engineering and quit their jobs to start what quickly became one of Canada’s fastest-growing companies. Targeted at millennials, the brand is best known for its minimalist aesthetic and elevated basics. Their eco-friendly clothing is made from recycled fabrics and materials to help minimize the company’s impact on the environment. Originally launched as an online menswear store, the company opened its first brick-and-mortar location in 2013 then expanded to womenswear in 2016. Everything is designed in-house at their HQ in Montreal’s Mile End neighborhood. They also offer a monthly clothing subscription box called Style Plan. Every month, members are sent a box containing the latest seasonal pieces based on their personal style and budget. There are no shipping fees, and you only pay for what you keep.

Mackage is a world-renowned Canadian contemporary outerwear brand that has earned a reputation for its stylish-yet-functional winter coats and down jackets. Tested in real Canadian winters, Mackage jackets can endure temperatures as low as -35°C. Every detail has a specific function designed to fight the cold. The brand also uses Nano Down, which increases the jacket’s warmth and durability. The label was established in 1999 by designer Eran Elfassy. Two years later, his childhood friend Elisa Dahan joined the company and the rest, as they say, is history. Since then, the pair have gained a cult following that includes A-list celebrities such as Halle Berry, Gigi Hadid, Gwyneth Paltrow, and Madonna. Mackage is also a fashion favourite of the Duchess of Sussex, Meghan Markle, who has been photographed wearing their pieces on several occasions.

Emeric Tchatchoua is the creative director behind 3.Paradis, a men’s luxury ready-to-wear label he founded in 2013. The “3” represents the perfect equilibrium between mind, body and soul and “paradis” is French for paradise. Worn by popular musicians like Future and Migos, the Montreal-based brand has garnered international recognition for its innovative menswear that blends tailoring and streetwear. Tchatchoua, whose parents are from Cameroon, was born and raised in Paris. Growing up, he lived in Doula (Cameroon), London (England) and Reims (France) before moving to Montreal, where he studied fashion at École supérieure de mode. His designs are heavily influenced by his Parisian youth, pop culture, Japanese street style, and his African roots. Hailed as a leader of the new school, Tchatchoua was shortlisted in 2019 for the prestigious LVMH Prize for young fashion designers. He describes his aesthetic as “disruptive, poetic and chic.”

Saintwoods is a lifestyle brand based out of Montreal with roots in event promotion and production. Founders Nathan Gannage and Zach Macklovitch became largely known for throwing parties, but now have a hand in fashion, music, marketing and other ventures. Their clothing started out as promotional merch and eventually progressed into a streetwear label carried by luxury retailers Holt Renfrew, SSENSE and A Ma Maniére. The brand is named after an intersection in Toronto where Gannage grew up. Manufactured in Montreal and L.A., its namesake clothing line offers a range of basics and ready-to-wear pieces inspired by the city’s youth culture. Under the Saintwoods brand, the duo also operates a creative agency, a vodka company, SuWu restaurant, École Privée nightclub, and bar Apt 200 in both Montreal and Toronto.

Boasting 350,000 followers on Instagram, Dime MTL is a skatewear brand that has become a household name comparable to the likes of Supreme and Palace. Originating in 2005, it has gone from a crew of skaters making videos to being credited as one of the brand’s putting Canadian streetwear on the global map. In 2017, they opened the doors to their flagship store on Montreal’s trendy Saint-Laurent Boulevard. The brand is known for doing limited drops of skatewear essentials that mostly include hoodies, tees, and crewnecks featuring its Dioresque logo. Along with their crossover success, Dime has released exclusive sneaker collabs with established brands like Vans, DC Shoes and Reebok.

Established in Montreal in 2009, Atelier New Regime is a streetwear label created by Setiz Taheri and brothers Koku and Gildas Awuye. The trio used to sell slogan t-shirts out of their trunks until 2013 when their side hustle turned into a real fashion brand. Five years later, they won Menswear Designer of the Year at the CAFAs. Nowadays, ANR has a storefront on Notre Dame Street West in one of Montreal’s busiest neighbourhoods. The store’s interior is painted bright orange as a nod to the brand’s signature colour. Their range of clothing, accessories and shoes is designed for the modern man, drawing inspiration from street style, Hip-Hop, and the city’s cultural diversity.

A post shared by RBW / RAISED BY WOLVES (@raisedbywolves)

Raised by Wolves is the brainchild of Cal Green and Pete Williams, the editor-in-chief of famed streetwear blog Highsnobiety. Founded in Ottawa in 2008, their products are primarily made in either Canada or the US. Sold in over 20 countries, the label is widely recognized for its high-quality streetwear staples defined by bold graphics. Herschel Supply Co., Naked & Famous, and Timberland are just a few of the big names that have collaborated on capsule collections with the brand.

Mercy House was founded in 2018 by designer Karen Vaquilar. The fashion brand produces distinctive minimalist streetwear that is gender non-conforming. They work with local textile suppliers to reduce waste and construct their garments using excess fabrics.

Kuwalla Tee, pronounced quality, is an eco-conscious streetwear brand that has been around since 2012. Started by brothers Yaniv, Dan and Oren Abecassis, it all began with 3-pack cotton tees. The label has since grown to offer premium clothing basics for men and women that is sold in over 400 retailers across North America. The Koala mascot embroidered on all their garments represents their love and respect for Mother Nature. The brand promotes sustainable consumption and has pledged 1% of their sales to environmental causes.

Denis Gagnon’s career in fashion has spanned more than two decades. The women’s clothing designer is famous for his use of leather and silk. A master of playing with textures and layers, Gagnon’s creations are often compared to moving sculptures or works of art. He makes everything in his basement atelier, located in his boutique in the historic Old Port. His pieces are also sold at Simons stores across Canada. Regarded as a pioneer in the Montreal fashion industry, Gagnon is the first Canadian designer to have an exhibition at the Montreal Museum of Fine Arts.

If there are more dope Montreal clothing brands we should know about hit us up at info@shiftermagazine.com.