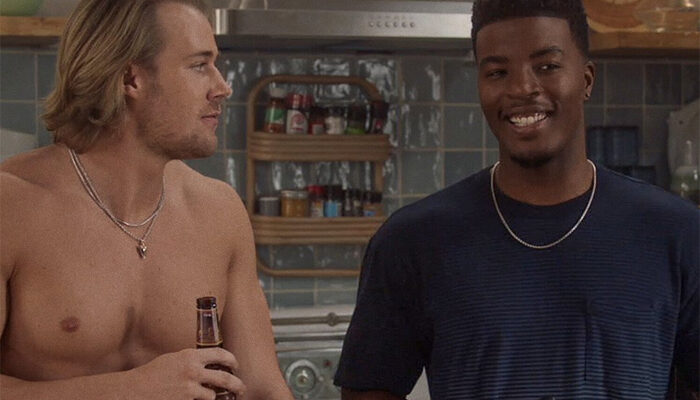 Episode two opens with Golden Angeles playing in the bowl game mentioned in the season premiere. After getting repeatedly crushed by the other team’s linebacker (#56), Jordan is having trouble moving the ball up the field. Coach Garrett puts Isaiah in the game who chop blocks and injures their linebacker giving Golden Angeles the advantage. Liv and the girls see the game at home which triggers Liv to call Billy about her theory of Coach Garrett rewarding players to injure opposing players. The Condors still lose despite the advantage, but for Liv, things are just getting started.

At home Grace and Coop encourage Spencer to stop moping around the house and enjoy being young; or as Coop calls it, “A little less workin’ out and a little more wildin’ out.”

Patience makes her season debut this episode, stopping in at the studio leaving her to wonder why Jordan’s there (forgive her, she missed last episode).

Asher’s girlfriend Jamie makes her season debut as well, showing up at the team office. He feels the pressure to impress the coach and do a good job. Unfortunately, Coach Montes is the least of his worries. He’s preoccupied with JJ who blew off his exit interview and isn’t doing his offseason workouts. JJ is clearly taking his opportunity on the team and Asher for granted.

JJ, Asher and Spencer finally decide to party, but the only problem is Spencer doesn’t know any girls on campus. He calls Davita, who invites them to a sorority party, and finds out JJ already put out a #smashtour social media post advertising his singlehood. At the party, Spencer tries to show the guys he still has game, but can he actually go through with it?

At the party, Asher resigns from trying to help JJ as he continues to be irresponsible.

Meanwhile, with Clay taking his artist, Layla looks to take his head of PR. After visiting Keating Records and looking to meet with Laurie, she decides to take her Gia out. After following Spencer’s new single ways on social media, Liv crashes the ladies night. Is it me or is something brewing between Gia and Layla?

Liv confides her theory to Jordan, but he’s not trying to hear it. He then goes to Billy Baker and finds out he already knew. In the end, it turns out Liv may have been right after all.