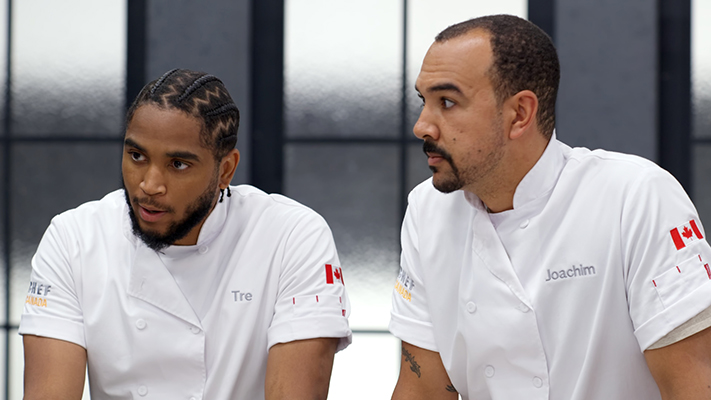 Among the contestants on Top Chef Canada Season 10 are Tre Sanderson and Joachim Hayward. Here’s a closer at look at these two talented chefs.

Since its debut, Top Chef Canada has emerged as the premiere TV food competition show, making its winners into household names and propelling them into culinary stardom.

Food Network Canada recently premiered the 10th season of the ratings mega-hit, putting 11 of the country’s best professional chefs to the ultimate test. To celebrate this milestone, they are adding a little twist—for the first time ever, the show is going international, taking contestants to one of the world’s most exciting culinary destinations, leading up to the finale.

Among the chef’s competing this season are Trey Sanderson and Joachim Hayward; two Black Canadian chefs looking to take home the top prize.

Currently the Chef de Partie at Vela in Toronto, Trevane ‘Tre’ Sanderson brings over 10 years of culinary experience to the show, with stops at some of Toronto’s hottest kitchens, including Baro and Hotel X.

His inspiration for becoming a chef came from growing up in a Caribbean home where food and cooking brought the family together.

“Growing up and being in a Jamaican household, food was so important”, he explains. “Everyday, my grandmother or my mother would make a spread of food, whether it was ackee and salt fish, dumplings or oxtail. At a young age, the food was so good and it made me interested in pursuing a professional career in this industry…it was inspiring to see the smiles it puts on our faces.”

Having never been the chef of a restaurant or a sous chef, Sanderson felt he had a lot to prove which is why he leapt at the opportunity with hopes of becoming the competition’s first Black winner.

“Coming on this competition, and competing against some executive chefs and owners, I had a lot to prove. As soon as I got the call I was like, ‘Now is my chance to shine and showcase what Tre can do; what he can bring to the table and the talents I can show…I learned a lot as a chef and it was a fun ride.’

For Hayward, his path to Top Chef was quite different. His love for cooking didn’t start at home in the family kitchen, but in a high school cooking class.

“In my senior year at high school, we had a generic cafetaria, but the guy running it was a Certified Red Seal Chef in British Columbia”, he told SHIFTER in a recent interview. They started a program to introduce the first year college culinary curriculum into senior year in high school…Next thing you know we’re breaking down whole fillets of salmon, and we’re making terrines, and we’re making wedding cakes and sausage…That just catapulted my interest at a young age.”

Known for his bright, nostalgic, and colourful culinary creations, he opened Crosley’s, his dream restaurant, during the pandemic to excellent reviews, only to see it shutter shortly after. Now the Head Chef at Wynona in Toronto, he recently welcomed his second child who he looks to inspire through his appearance on the show. For him, it was also about self-discovery.

“I grew in ways that I didn’t expect to, to be honest. My morale was pretty low…I needed this way more than I thought I did. It was a chance to explore my own self…Everything came into focus. My whole 13 to 14 year career. Watching Top Chef OG in the States and then Top Chef Canada, it never seemed like a possibility. So here I am living it.”

This season, Top Chef is welcoming a new judge to the program—internationally acclaimed chef, author and one of the world’s leading fermentation experts, David Zilber, who appeared on the show previously as a guest. His journey to becoming a cook is an amalgamation of Sanderson and Hayward’s journeys. Growing up in Toronto in a Caribbean home, Zilber got started cooking at home with his Dominican mother, but it wasn’t until high school that his guidance counselor encouraged him to pursue it as a career through the Ontario Youth Apprenticeship program. This allowed him to spend his last six months of high school taking a college course before entering the workforce as an apprentice while earning his final credits.

Together, Zilber, Sanderson and Hayward point to the expanded cultural and culinary diversity of the competition over the past 10 seasons, in a time where some Black chefs, including Sanderson and Hayward, still report instances of racism in the industry. Nevertheless, both see the increased diversity of Top Chef Canada and the increased awareness surrounding anti-Black racism as steps in the right direction.

Top Chef Canada Season 10 airs Mondays at 10 p.m. ET/PT on Food Network Canada and is available to stream live and on demand via StackTV