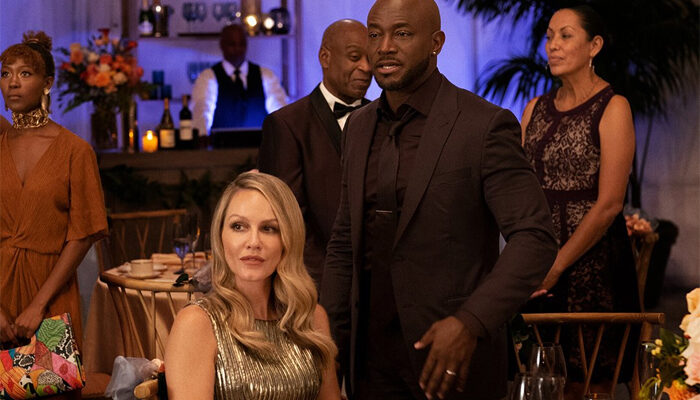 Between Spencer and Olivia, and Jordan and Layla, it’s an episode full of passion. Here’s our All American season 5 episode 4 recap.

The episode begins with Spencer waking up to a phone call from Coop letting him know his mom and the other parents were in jail, but what do we spot out of the side of the screen? Some curly locks of hair? Apparently he’s not alone.

He goes to the jail only to find his mom and the other adults are behind bars.

Then the story flashes back to how it all went down. As Grace and D’Angelo prepare to be married the following day, they have a gathering for their two families. What was supposed to be a handful of people turns into a big bashment.

Meanwhile, Layla and Jordan are sneaking around, making out hard. When Liv knocks on the door, Jordan is forced to hide in Layla’s bathroom. The passion between these two is crazy and them sneaking around adds some spice to the storyline. Unfortunately, it might be short lived since JJ is onto them.

Denise and Laura add some spice of their own to the episode “kidnapoing” Grace and bringing her onto a party bus for her bachelorette party. They surprise her with some strippers and a visit from her little sister Lerecia (aka Reece), but there’s clearly some tension. Grace is mad that Lericia was MIA for their parents final days and Spencer’s graduation.

The men decide to match that energy since taking Preach to his first bachelor party, but it’s not what he expected. In simple terms, it was boring as hell. Not my kind of bachelor party. Once the men and women meetup randomly, a dare gone wrong lands the senior Vortex in jail.

Meanwhile, JJ wants the Vortex to do a games night. Spencer is spending time texting with his new boo which catches Liv’s attention. As a sidebar, Liv looks fire this episode. Damn!

The game of Who’s More Likely is going well until Coop opens her big mouth about Spencer’s recent hookup. Bruh. No tact and behaviour. This leaves Spencer to do damage control with Liv. He sticks around to help her clean up, leading to a passionate kids (I rewinded and watched that scene five times). Earlier in the episode he says he was “enjoying his single life”, but in this scene he admits “I haven’t moved on”.

Fast forward and the kids are getting their parents out of jail in time for the wedding. Liv and Spencer get back into their girlfriend and boyfriend bag as he asks her to help his mom get ready to walk down the aisle.

The wedding reception is lit, but the good vibes are short lived as Liv slams the breaks on their reunion (these two are so frustrating).

Overall, this was a really good episode despite Spelivia’s consistent need to self-sabotage.