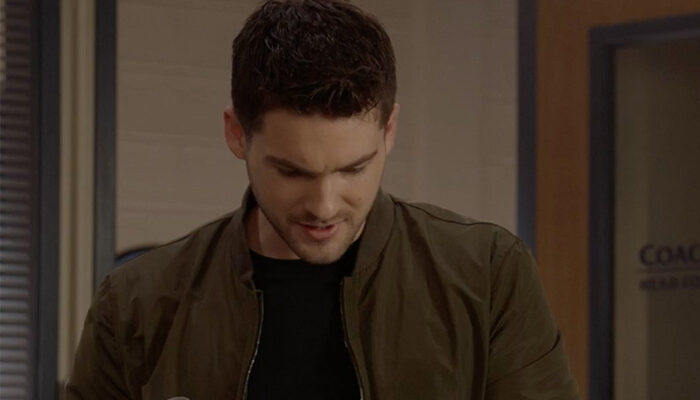 Spencer, Jordan and Asher are in recruiting season and JJ leaves the beach house. Here’s our All American season 5 episode 6 recap.

The episode opens with Coach Garrett stepping down as head coach of the GAU football team on national signing day, but Liv is still releasing her article as she learns Garrett may be up for another coaching job at a D1 school.

Liv confronts Coach Garrett asking who tipped him about the article. He, in turn, cautions her to not blow up Spencer and Jordan’s football careers.

Meanwhile, Jordan, Spencer and Asher are in recruiting mode for their respective football programs, especially after Coach Garrett’s sudden departure. When highly sought after prospect Marco Galvez reopens his recruitment Spencer and Asher find themselves competing. While GAU gets 17 out of 20 recruits, including Galvez, he does recruit three players off of the GAU roster.

JJ continues to be irresponsible, hosting parties every night and not picking up after himself. Asher tells Jordan to not pick up after him, but Jordan chalks it up to JJ being a freshman. When JJ drinks too much, Jordan tries to shut down the party. JJ crosses the line in talking about Layla leading to a fist fight. Jordan learns the hard way that Asher is right about JJ who decides to leave the beach house in search of more suitable roommates, accusing the guys of being a bunch of “grumpy old men”.

Patience is excited about her new song and shooting music video with a full crew, but shit hits the fan with Gia takes her in a bold creative direction that Patience and Layla don’t agree with. Is there dissension in the ranks?

But it’s not all doom and gloom for Layla as her and Jordan meet up for another secret rendezvous.

To end the episode, Liv drops the Coach Garrett article under the name Jayden Davis in order to limit the backlash against Jordan and Spencer.