Set three years after the events of the collapse of Jurassic World, director J.A. Bayona guides the “Jurassic” franchise down a familiar, but imaginative path in Jurassic World: Fallen Kingdom.

In the first scene, Bayona sets the tone for an exhilarating ride that isn’t without its fair share of cheesy moments. It’s a film that maintains franchise congruity while implementing new directorial enhancements to its complicated history.

After the unparalleled success of Steven Spielberg’s 1993 classic, the “Jurassic” franchise instantly hit a steep decline. Despite The Lost World’s visceral endeavor, it simply didn’t measure up to the original’s seamless blend of harrowing adventure and engaging science-fiction. Along the way, the “Jurassic” franchise transformed into more of a Summertime monster flick rather than a blend of what Spielberg accomplished in the original. Some would consider this the reason behind the unfortunate downfall of a once mighty kingdom, if you will. Surprisingly enough, in the fifth installment Bayona manages to exude many of Steven Spielberg’s greatest traits within the realm of the “Jurassic” franchise.

Back when Colin Trevorrow’s Jurassic World (2015) introduced hybrid dinosaurs, there seemed to be a lack of admiration for what this franchise used to be. Luckily, Bayona blends both the old and the new in what is surely going to be this Summer’s biggest and loudest movie.

The film’s first scene amplifies the intensity and the cinematography is in a class of its own among blockbuster films. Bayona’s use of lighting, darkness, and a well-placed camera conveys the looming threat time and time again. At times, Bayona manages to take our breath away with heartbreaking imagery of dinosaurs expressing pain and it contrasts with the film’s dark turns in unforgettable fashion. Coupled with the stunning imagery of dinosaurs is thought-provoking discussion regarding animal rights for the extinct beings. From a writing standpoint, there should have been more room to discuss the ramifications and intricacies of a world in which dinosaurs can exist. The surface value is there, but much like The Lost World (1997), it’s a concept that’s glazed over when it should be something we look at more in-depth. 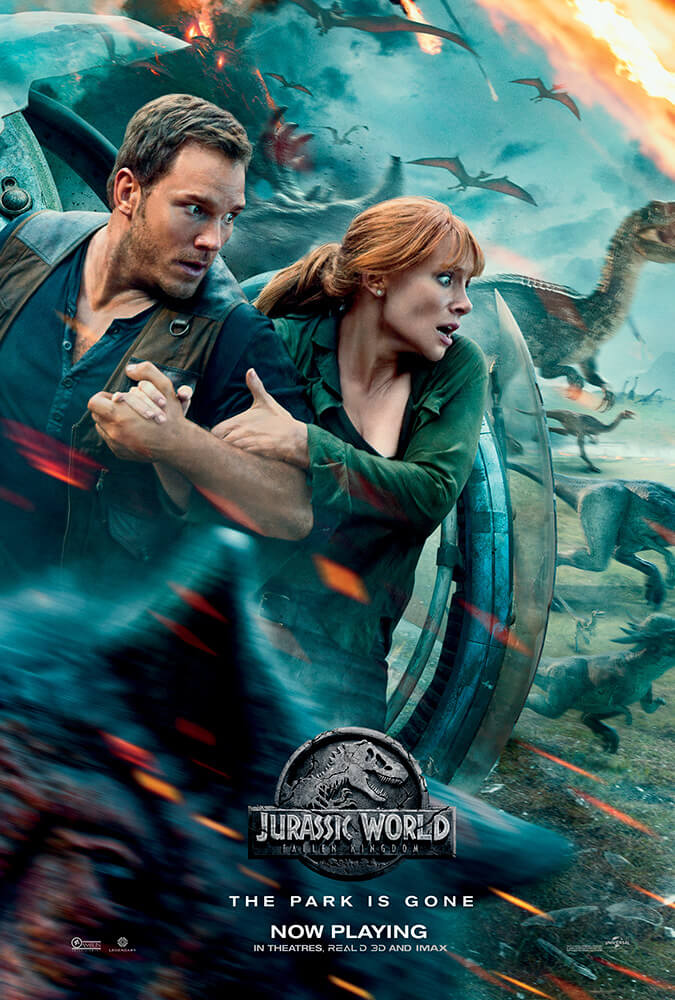 Fallen Kingdom’s biggest flaws surround the abnormally awful dialogue. Rather than being subtle and methodical, writers Colin Trevorrow and Derek Connolly go for bold ham-fisted punches to the face. There’s a lot left to be desired regarding some of the thematic value in Fallen Kingdom and it’s something many filmgoers cherish, but you’ll have a tough time finding anything beneath the surface worth raving about. It’s truly astonishing to see that Bayona managed to create something so invigorating out of something so mediocre. Looking at the film’s plot and structure, it’s quite straightforward and capably coherent. A few subplots should have been treated with more care and attention, but there’s not much to lose track of because it’s a very simple film to follow. Many of the characters work in close relation with one another, and considering two-thirds of the film takes place in one mansion, following the film is a simple task. Fallen Kingdom doesn’t make the audience work too hard to get it’s dessert. Although there a few hiccups along the way, the last two-thirds are entirely unforgettable.

Coming off visual stunner A Monster Calls (2016), Bayona’s first attempt at a blockbuster of this stature should be as bad as people are making it out to be. Here’s why it isn’t. Simply put, Bayona loves making movies. From start to finish there’s an instant resurrection of honesty, sincerity, and passion for the art form. Since 1993, Jurassic Park has always had elements of cheesiness as a part of its DNA, and here, we see that same approach taken by Bayona.

Is it too serious like many blockbusters today? No, and that’s a great thing. For the first time (in what seems like ages), there’s a Summer blockbuster that fully understands what toys are in the sandbox to play with. Fallen Kingdom is a true testament to wide-eyed horror amidst haunting beauty. There are so many shots that pay homage to Gothic horror films of old it almost transcends the franchise. As mentioned previously, the final two-thirds are evocative of ancient stories of old where the young princess is trapped in a castle being chased by the fire-breathing dragon. In some weird way, Bayona nailed the “Jurassic” formula by maintaining the franchise’s complicated legacy and injecting it with exhilarating German expressionist horror. Each frame tightly squeezes its characters into a confined space and Bayona toys with that by turning Fallen Kingdom into a terrifying escape room thriller.

Jurassic World: Fallen Kingdom isn’t perfect, far from it, but it’s great to see a visual storyteller guide a big time Summer blockbuster down a path that embraces the old and prepares for the new. Couple that with one of Michael Giacchino’s greatest score compositions and you’ve got yourself a roaring success.