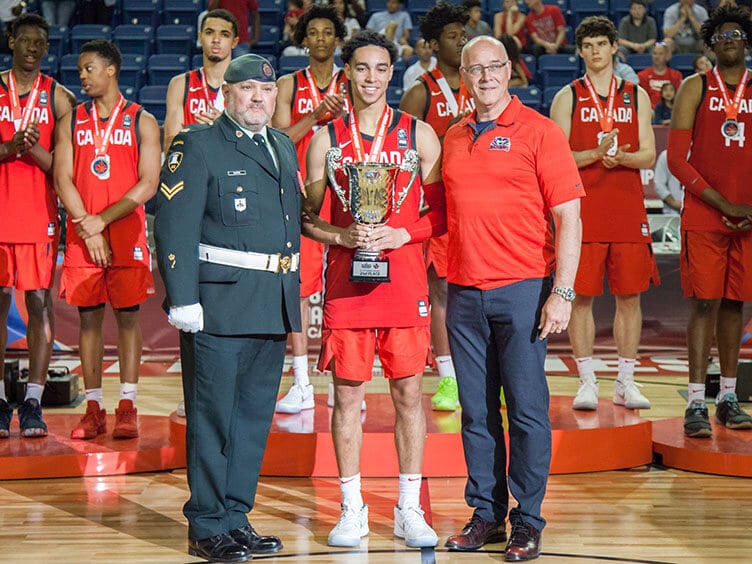 The Canadian U18 team, captained by Andrew Nembhard, finished second at the FIBA U18 Americas tournament (photo credit: Reuben Polansky)

Last weekend, the Canadian U18 team stood at centre court and reluctantly received their silver medals after falling to team USA in the gold medal game of the FIBA Under-18 Americas Tournament. Though the second place standing secured Canada a place in next Summer’s U19 World Championships, to many of us it felt like an unexpected loss to a team that seemed beatable.

For those not who haven’t been paying attention to the numerous achievements of the program over the last several months, the outcome would look like another blow to Canada’s historically unfavourable reputation in international play. But for those who have, they know the global hoops community is finally taking notice that the Great White North is a basketball hotbed, ready to flex on anyone who tries to deny the uprising of our squad in international play.

If you’re one of the few people who haven’t heard of R.J. Barrett, just know he’s the top high school player in North America and led Canada’s Under-19 team to its first ever gold medal at the 2017 FIBA U19 World Championships. He was also the second Canadian in six years to be named the James Naismith high school player of the year, a U.S. based award usually given to hoop stars down south, and is on his way to suit up for Duke next fall.

Barrett and Canada’s success has me and many other casual fans interested in watching Canada participate in international play. There was a time growing up when watching Canada play against other countries was the equivalent to the recent Cavs vs. Raptors playoff series- you knew who was going to win, but it was still painful to watch.

Canada, from what I can remember, was just not good enough. Not even RJ’s father, Rowan Barrett, and his then Canadian teammate Steve Nash (also RJ’s godfather) could get them over the hump during the 2000 Olympics in Athens, Greece.

Fast forward 18 years and things have changed dramatically. There’s more hype surrounding Hoops Canada, and I’m not just taking about the prospects we’ve sent to the NBA within the last decade. The youth talent pool seems to be getting bigger each year, which is having a direct impact on the success of the U18/U19 teams and will hopefully continue to the Men’s Team this summer as they play qualifying games in Toronto and Ottawa for the 2019 World Cup to be held in Japan.

We all know about Andrew Wiggins, Tristan Thompson, Corey Joseph, Jamal Murray, Kelly Olynyk and so on, but names like Andrew Nembhard, Addison Patterson, Luguentz Dort are examples of young Canadian players making waves for themselves and our nation.

It may take about a decade or so, but with the current foundation of strong grassroots development of talent, coaching and funding, Canada Basketball will become a true global power sooner than later.