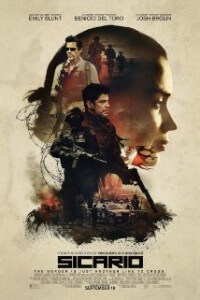 In Sicario, Emily Blunt plays an FBI agent recruited by a government task force to aid in the escalating war against drugs at the U.S.-Mexico border.

I did not have a good time watching this film.

This isn’t to say that Sicario isn’t any good, however. In fact, this most recent production from French-Canadian director Denis Villeneuve is a narrative and technical tour de force, not unlike his previous outings Prisoners and Enemy—but more on that later.

Blunt’s character, FBI SWAT officer Kate Macer, is the window through which we get to see most of the film’s action. After an IED kills two police officers on her team, she joins a task force led by Matt Graver (played with the kind of dry humour you wouldn’t expect from Josh Brolin) to find the cartel leader responsible for the bombing. Enter Alejandro, who works closely with Macer during the film’s runtime; he’s by far the most interesting character mainly because we’re never quite sure what his motivations are. Benicio Del Toro delivers one of his best performances in years, portraying a deep and complex character despite having relatively few lines. The final 20 minutes of the film are mostly focused on him; it’s a jarring change after only following Macer for the better part of two hours, but only a minor issue overall.

Legendary cinematographer Roger Deakins is behind the camera once more (he also worked on Prisoners with Villeneuve), providing great angles that serve well to keep the viewer in the moment, from the close-up shots of Macer and her team as they slowly move into enemy territory, to the wide night time shots that make good use of natural light, to the first-person thermal and night vision shots. Taylor Sheridan’s tight script works together with Academy Award nominee Johann Johansson’s subdued score and Deakins’ camera work to provide almost palpable tension during the action scenes, reminiscent of Zero Dark Thirty and Traffic, but where Sicario truly shines is in the sound design. I like this new trend of using realistic gun sounds, and they’re used to great effect here; even when suppressed, if a rifle goes off during a silent raid scene, it spikes your blood pressure, as it should.

Some of the greatest movies of all time are the ones that explore morality—or lack thereof. Sicario is one of those films, its morally ambiguous plot line not clearly showing who to root for. This, along with the dark themes present throughout and the wince-inducing but never gratuitous violence, creates a situation that leaves that decision up to the viewer. I didn’t have a good time watching this film because for a long time after it was over, I was left with a feeling of dread, wondering, “was all that worth it?”