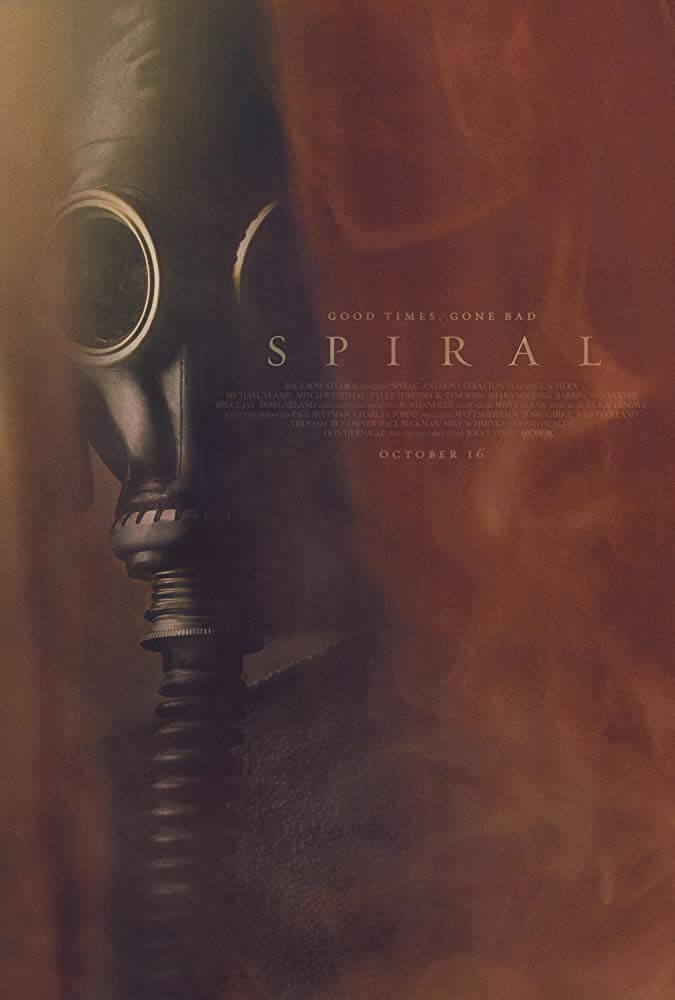 Six friends have their sights set on a thrilling weekend away for Corey’s bachelor party. After a long night of partying, the friends wake up to one of their friends missing, and Ellis decides to take action to uncover where their friend has gone.

With Clarke being an independent director, it is a pleasant surprise at how well he implements big budget techniques into the look and feel of his film. In a horror film, lighting is a huge aspect of immersing your audience into the terrifying surroundings of the character’s scenario. This is one of the many great aspects of Spiral, and why it shows lots of promise for Clarke and what may come from him in the future.

Many sequences are masked through colorful cellophane, evoking a heightened sense of horror and the supernatural, emulating Dario Argento’s 1977 horror classic Suspiria in more ways than one. Alex Kachingwe’s original music is an electric exercise in synth tracks that reminds me of what the Goblins did for Suspiria as well. Spiral is a wide-eyed technical deliverance of fascinating thrills and engrossing cinematography.

Clarke’s direction and writing is most important here. Where most up and coming directors would crumble under pressure, Clarke manages to continuously get the best performance out of his actors. When working with non-professional actors it can be a challenge to get them to adapt to the circumstances of the narrative. Thankfully, as the film progresses and the story begins to ask more from the actors, they rise to the occasion and make it believable. When the film starts, their dialogue and performances are quite rough, but as the film evolves so do they.

For Clarke to write and direct Spiral is quite ambitious for a rising star, and although his ambitions take hold of him every once in a while, he handles the project well. The film’s shortcomings are due to a lack in believability surrounding the six friends. As mentioned previously, their performances fit the role well, but there is never a time when you believe the guys had been friends at any point previously. Despite the conflict between Ellis and Will (which blossoms into some meaningful drama), the film feels as if it could have benefitted from a slightly longer runtime, allowing Spiral to pack a bit more of a dramatic punch to compliment some well done thrills.

Overall, Spiral is one helluva good time. Not only does it skip along at a brisk pace, but it is a technical monster. Boasting one of the year’s best score compositions, sinister cinematography, and lighting reminiscent of great horror classics like Suspiria. As I said before, it could benefit from a longer runtime dedicated to building the relationship between the friends and a stronger grip on its ambitions, but it delivers more times that it doesn’t. Spiral showcases a filmmaker on the rise with a knack for the horror genre and filmmaking in general, giving us an insight into what may come in the near future from Joe Clarke.

Spiral premieres at the Arclight Theater in Hollywood on October 16th and is available on iTunes and Amazon for digital download on the same day.