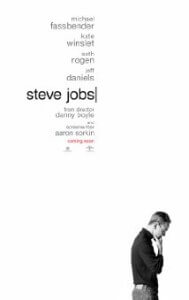 Steve Jobs has had more than three films developed and released since his death, but only now does he have one worthy of his legacy. Danny Boyle’s Steve Jobs is an unusually crafted film that serves as possibly the greatest advertising campaign ever, as well as an incredible movie. Steve Jobs boasts an excellent script with excellent performances to go along with it. With the addition of some clever cinematography and a subtle but effective score, Steve Jobs is a near masterpiece.

Once again, Michael Fassbender has shown the world that he is an incredibly gifted actor with immense range, charisma and screen presence. Nearly every scene in this film features Fassbender and not once does it leave you tired of his presence or bored with his performance. One such scene is a rather heated argument with Jeff Daniels’ character, John Sculley, which is a nearly half an hour back and forth between the two, that would normally get tiring. However, because of Fassbender (and Daniels) it maintains its suspense for the entire duration of the scene. Every part of this film works simply because Fassbender works.

Shining just as brightly as Fassbender are his co-stars, namely Seth Rogen as Steve Wozniak, Kate Winslet as Joanna Hoffman and Jeff Daniels as John Sculley. Every single one of these actors puts on a supporting performance that is Oscar worthy. Winslet stands out yet again playing a strong female character that not only stands up to Jobs on multiple occasions, but acts as his pillar. The relationship between Jobs and Hoffman is one the strongest in this film and constantly drives it forward. As stated before, the argument between Scully and Jobs is simply put one of the most entertaining scenes this year with Daniels having no small part in that. Finally, also worth noting is Rogen’s performance as Steve Wozniak. His was one that required a little more subtlety, due to the relationship between the co-founders of Apple, but when he needed to, Rogen delivers. Rogen has a dramatic career ahead of him if he chooses to pursue it and I wouldn’t be surprised if he is nominated this year.

Aaron Sorkin might not be a household name, but in the film world he can do no wrong. Sorkin has seemed to find his niche in these biopic films, from The Social Network and Moneyball, to this film here. Once again, his witty, fast paced dialogue captures the audience in this world and doesn’t let them go until the end. Although the structure of the film, following three separate product launches, is a little confusing, Steve Jobs is absolutely stellar work from Sorkin once again.

One other positive worth mentioning is the beautiful cinematography. Some of the backstage shots, overhead and tracking shots were masterfully crafted and executed, immersing the viewer in the world that Jobs and his team live in.

Overall, Steve Jobs is a spectacular film that does not deserve the beating it’s taking at the box office. Fassbender’s performance alone is worth the price of admission, and adding in the brilliant supporting cast only makes it better. Maybe the audience is just tired of Steve Jobs movies.