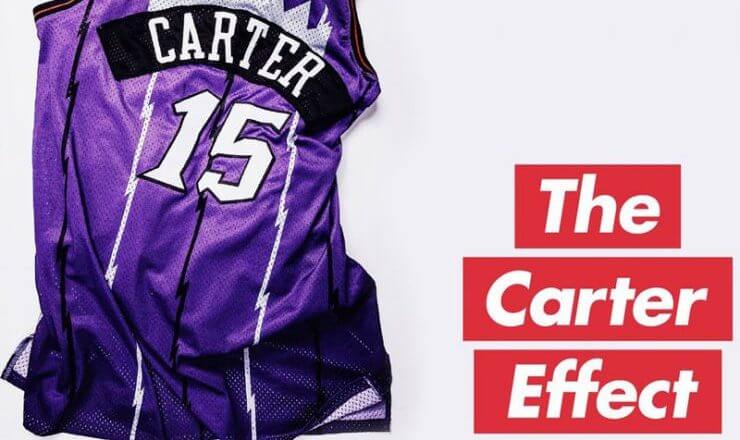 So I finally had the opportunity to check out the much anticipated Netflix premiere of The Carter Effect which released this past weekend. It’s a sports documentary directed by Sean Menard and produced by Lebron James and his longtime business partner Maverick Carter’s Uninterrupted Media. The film chronicles the rise of current NBA player Vince Carter and his cultural impact on the game of basketball in the city of Toronto.

The film debuted at last year’s Toronto International Film Festival (TIFF) and tickets sold out fast for obvious reasons. Carter is still seen as a god by some basketball fans here in the 6ix. Nothing proves this more than having the 6 god himself, Drake, in the film giving insight into the Vinsanity that put Toronto on the map before Drake was even a thing.

Drizzy is joined by fellow Toronto icons Director X and Kardinal Offishall, along with other big names like T-mac, Steve Nash, Leo Rautins, and Jalen Rose, to provide their own point of view on Carter’s ascension from obscurity to being the linchpin in the future development of basketball in Canada.

Although it’s entertaining, as far as sports docs goes, there’s nothing overly revolutionary about the film. It takes us through a basic timeline of Carter’s career with the Raptors, stopping along the way to go deeper into areas that would, as the title suggests, validate Carter’s effect. In comparison, I would call it a budget version of ESPN’s award-winning 30 for 30 series.

That said, there were some stories that stood out and provided insight into events that weren’t common knowledge during Vince’s time with the Raptors.

Everyone and their grandmother knows the 2001 Slam Dunk competition was the greatest of all time and Carter’s coming out party. But Vince talks about how intricate he was in his preparation and how aside from being drafted, winning the dunk contest was his next major goal as a pro athlete.

The doc goes on to give us a look into Carter’s influence in the Toronto entertainment industry as a club owner, detailing how he was instrumental in bringing bottle service to Canada. He helped create a vibe in the city that made it ‘cool’ for NBA players to hang out in Toronto (but not enough to want to play for the city).

Other dope stories from the doc detailed Carter practicing daily with a young Steph Curry (2x NBA MVP) when his father Dell was a teammate of his for a few years. And how Carter’s second Nike signature shoe, the VC2 was the beginning of the sneakerhead culture going mainstream in Toronto after mostly being an underground movement.

My biggest knock on the film is it’s pretty much a Vince Carter love affair and not an objective film. Though the director touches on a some of the negativity Carter experienced, it comes across as only blemishes to an otherwise perfect career, but that’s not how I remember it.

His relationship with Toronto media and fans came to an ugly end after he was constantly questioned about his leadership abilities and the true depth of his injuries at the time. No one in the film challenged the idea that Carter may have had a negative effect on the Raptors as an organization. I’m not alone when I say I always wanted Carter to have the killer instinct like MJ and Kobe, but it never happened. He never achieved the same level of success after leaving Toronto, and was booed for 3-4 years every time he stepped foot in the Air Canada Centre as a member of the visiting team.

By the end of the film, director Sean Menard wants us to believe Carter’s effect on the game in Canada led to the stockpile of recent Canadian NBA first round draftees like Andrew Wiggins, Corey Joseph and Tristan Thompson (not sure why they showed Anthony Bennett who arguably is the biggest draft bust in NBA history). He could have a point, but with a run time of only an hour the film lacks the depth to really give substance to these claims.

A celebration of Carter’s time as a Raptor and the excitement he brought not only to Toronto, but the entire nation is exactly what this doc was all about. His impact on Canadian basketball is still in question, and this film, though captivating, fails to give me reason to fully believe in the Theory of the Carter Effect.