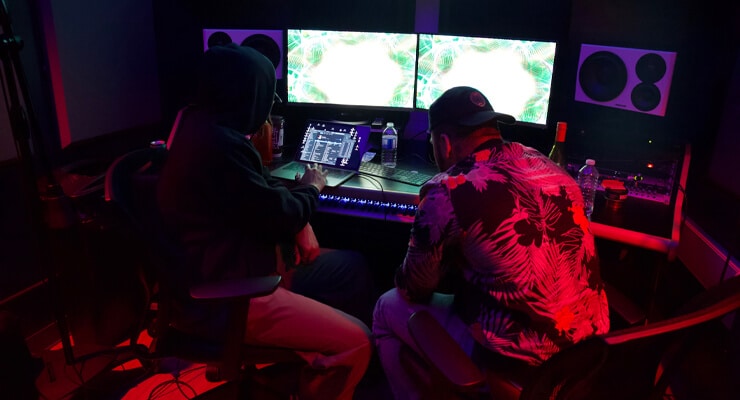 BEATCAVE was designed to create an inclusive, safe and welcoming space “for producers to come together and be part of one community.”

The multi-day retreat was created to help bring artists, engineers and producers “to come together to work on a collaborative tape,” said Jerome.

“J. Cole has a record label called Dreamville. They created an album where they rented out this studio in Atlanta…a big facility, and they invited different producers and artists to come and create this whole album. I thought that was so cool and said we’re doing that,” explains Ferguson.

This year they will be hosting the third CAMP for creatives over 19, which begins September 10th at Hoopville. This will be the first year the CAMP will be held outside of Toronto.

The retreat will last two days which will provide attendees with plenty time to focus on their craft, meet new people and interact with different creative spaces outside of their homes. One word used to describe the CAMP experience from past participants was “vibes”.

When asked what the retreat will look like, Ferguson said, “There will be specific cabins for studios and three daily meals. Networking will be happening and, of course, live performances.”

He also noted that participants will be partaking in workshops run by well-known producers. They will also be able to enjoy different camp activities such as swimming, kayaking, canoeing and more.

This program, funded by FACTOR, is designed to help bring people out of their homes and into the community.  In addition, it is also a great way to help those who want to tap into their creative side and receive mentorship to perfect their craft.

“We are excited to have the 60+ creatives enjoy the nature, network with their peers, learn some new tools to help their career, and of course making amazing music.”

BEFORE YOUR BIG BREAK: 3 THINGS TO CONSIDER BEFORE GETTING INTO THE ENTERTAINMENT INDUSTRY