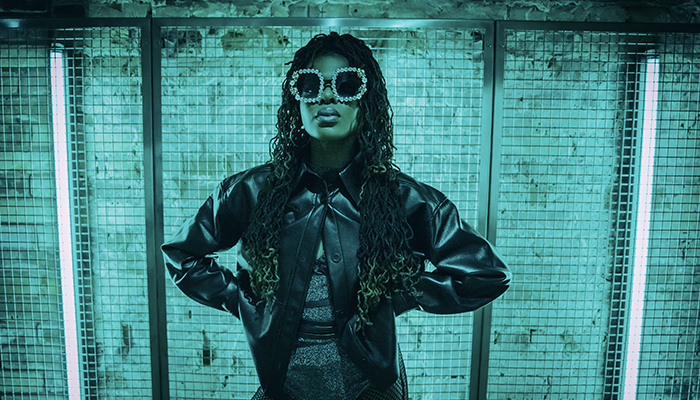 If you’re a TikTok aficionado like me, you’ve probably come across a familiar face on the platform: dancehall/R&B fusion artist Omega Mighty. Gracing our screens with dance challenges, music teases, and content with her family, the Bajan-Jamaican performing artist is quickly stirring up a buzz for her artistic excellence. And now she’s lighting ablaze a path with her own #viraltrend worthy anthem, “Gi Dem”.

Produced by drummer-engineer mastermind Taabu, “Gi Dem” is an electro-dancehall fusion spiced with suspenseful beat drops, layered percussion, and tropical bounce hues. Marking their third official collaboration, the duo are breaking sound barriers, both collaboratively and independently. Let’s just say, when you see “Mighty” and “Taabu” in the same sentence, you already know it’s about to be fire.

From her moody R&B debut “Drip Dreamin'”, to alt pop hits like “Ooey Gooey”, Mighty has been solidifying her eclectic taste and limitlessness, and now she’s coming for the crown of dancehall queen of the North.

“Gi Dem” is an anthem that brings the best of both Mighty’s and Taabu’s worlds. And if the sonic diversity of the track wasn’t reason enough to get up on your feet, the “Gi Dem” dance challenge certainly is. Choreographed by popular Toronto dancers Jonna Abrams and Kayanna Aldred, the trio bring effortless finesse to the record. For those who aren’t as blessed in the coordination department, fear not, because you don’t have to be a professional dancer to join in on the fun.

Listen to “Gi Dem” by Omega Mighty and Taabu above and watch the ‘Gi Dem” dance challenge right here.