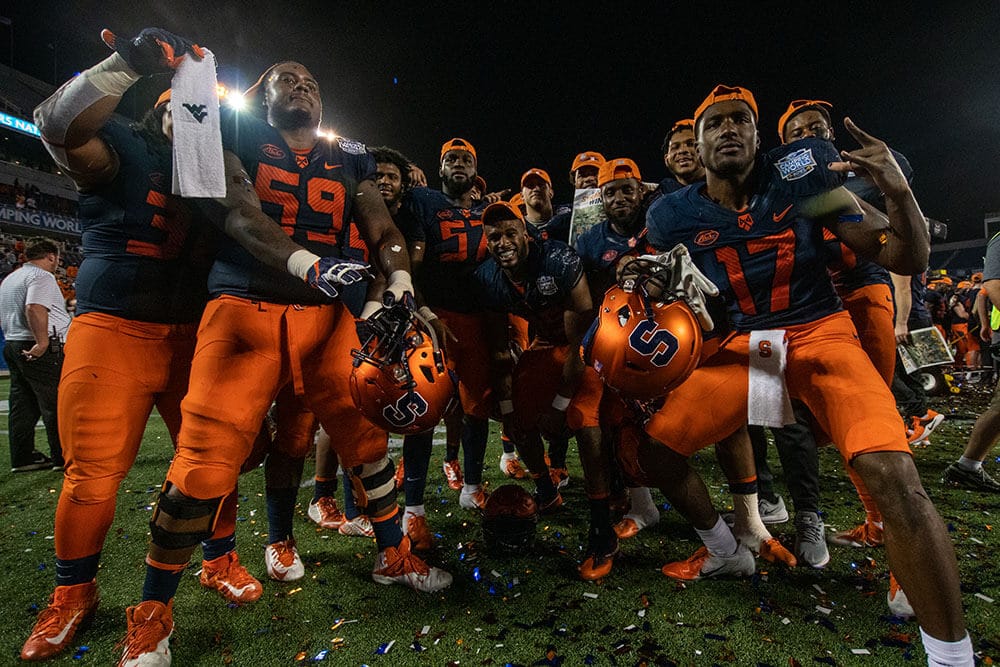 On Friday, December 28th, #20 Syracuse (10-3) and #16 West Virginia (8-4) squared off in Orlando for the Camping World Bowl at Florida Citrus Sports’ Camping World Stadium and SHIFTER was on location. In front of 41,125 fans, the Syracuse Orange toppled the Will Grier-less West Virginia Mountaineers 34-18. This win marks Syracuse’s first 10-win season since 2001, and their first bowl win (and matchup) since 2013.

The game started slow, with only 10 total points scored in the first quarter (7-3 Syracuse), thanks to a 4-yard rushing TD from Abdul Adams
(Jr). West Virginia scored off of a 28-yard field goal. In the first quarter, neither offence clicked with the Mountaineers’ offence completed
only 5 of 9 total passes. Eric Dungey (Sr) and the Syracuse Orange completed 5 of 8 passes with one interception, which was picked off by
Kenny Robinson (So). The turnover was Dungey’s first of two.

The second quarter was just as slow. It ended in a 14-12 lead for Syracuse. The Syracuse defence struggled to keep up with the newly minted Jack Allison (R-So) and his offence. The Mountaineers’ running game blew by Syracuse with minimal effort, yielding 101 rushing yards. Martell Pettaway’s (Jr) 51-yard run set up a field goal after a huge sack by the Syracuse blitz.  The West Virginia offence benefit greatly from the interception from the 1st quarter, leading to a 3-yard rushing TD by Kennedy McKoy (Jr), but kicker Evan Staley’s (R-So) nerves got the best of him, and he missed the PAT off of the upright. Abdul Adams punched in his second TD of the evening with a 1-yard rushing score to secure the lead for the Orange.

After halftime, West Virginia’s offence was off to the races. QB Jack Allison completed three out of three passes in the first drive, with the longest being a 34-yard pass to Tevin Bush (So). The drive ultimately ended with a 44-yard FG, after the run failed to convert on the 3rd down. Unfortunately for West Virginia, Syracuse came back with a 39-yard FG of their own to retain their 2-point lead. The very next drive, the Mountaineers had trouble moving the chains, but fortunately for them, Staley managed to kick the game’s longest FG, 49-yards. The quarter ended 18-17 for the Mountaineers, but Syracuse had the ball at the whistle.

The first play of the fourth quarter was a 14-yard touchdown pass to Trishton Jackson (Jr), putting the Orange up 24-18. In the fourth quarter, the Syracuse defence came up big, with West Virginia’s first play of the quarter being an interception at their own 33 by Allen Stritzinger (So). The interception turned into a Syracuse field-goal, putting the Orange up by 9, a two score game. Brian Ward’s defence came up big, with one sack, a forced incompletion and a tackle for a loss to force the punt. Once again, Eric Dungey’s arm turned into a rocket launcher; he threw a 42-yard pass to RB Moe Neal (Jr) to set up the 4-yard rushing TD by Jarveon Howard (Fr) to put the Orange up 16. The next WV drive, the Syracuse defence came up big with two tackles for a loss in their own red zone to force a turnover on downs. After that drive, Syracuse chewed off the clock, and punted the ball. With hope dwindling, West Virginia dug their own grave, going 1 for 5
in passing during their final drive. Syracuse also sacked Allison for the 5th time in the game to seal the deal.

Quarterback Eric Dungey was named MVP of the game as the Syracuse Orange celebrated a very successful season in a storm of blue and orange confetti.

During the presser, Eric Dungey and Abdul Adams conversed with media on their record-breaking season and their push to return to the national stage in a bowl game. Abdul Adams, who transferred from Oklahoma early this year, touched on the future of the program, being one of many offensive phenoms returning for the 2019 season.

Coach Dino Babers talked about the process he went through to re-vamp the Syracuse football program, how he thinks his draft-declared players will do, and the future of his program. He also had high praise for his offensive line, which includes Gatineau native Patrick Davis (So).

When asked him how the Canadian culture influences the team and fanbase of the Syracuse football team Coach Dino responded, “I think it’s a part of exactly what we do, we make a spiral graph around Syracuse and spiral graph surrounding areas, if you’re doing that evenly, we can get to Canada as fast as we can get to Philadelphia. One thing I’ve always had appreciation for in Canadian athletes is my first college roommate on a football team was a 6 foot 7 Canadian from British Columbia by the name of Jim Mills who played at the University of Hawaii football team. He went into to the NFL and played for the Baltimore Colts and was Rookie of the Year. Okay, he played his first year in the NFL and then he went up to Canada to play Canadian football. I’ve always had an appreciation for the Canadians, the normally have to redshirt because it takes a little time to learn the American rules compared to the Canadian rules. But outside of that, they are fantastic students, quick learners, and tough football players because of the hockey and they’re bilingual, they know two languages, which is really important when you’re making checks at the line of scrimmage.”

Ultimately, the game was a tightly contested game in a loud stadium. Aside from the Canadian content on the field, on our way out, license plates from all over the lower-48 states and a ton of “snowbirds” from Ontario and Quebec were seen. The NCAA is no exception, and since Syracuse Orange is the closest D-1 school to Ottawa-Gatineau area, Greater Montreal Area and Kingston, Ontario, it’s no wonder Syracuse has a following north of the border.

Photos and game recap by 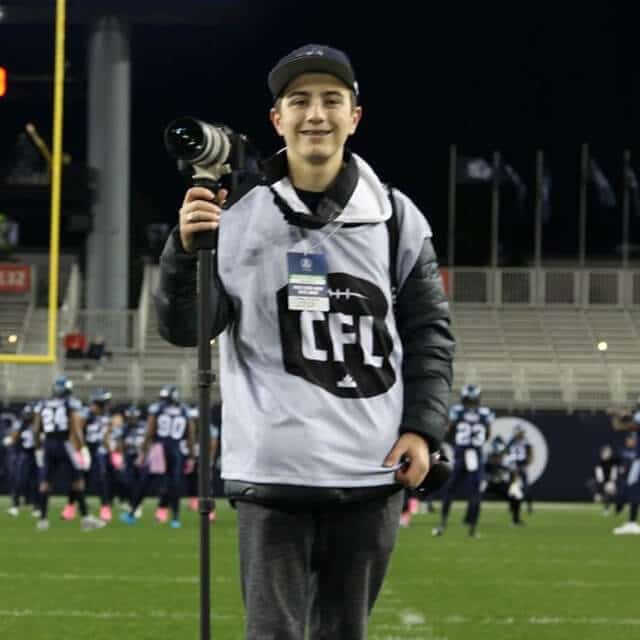