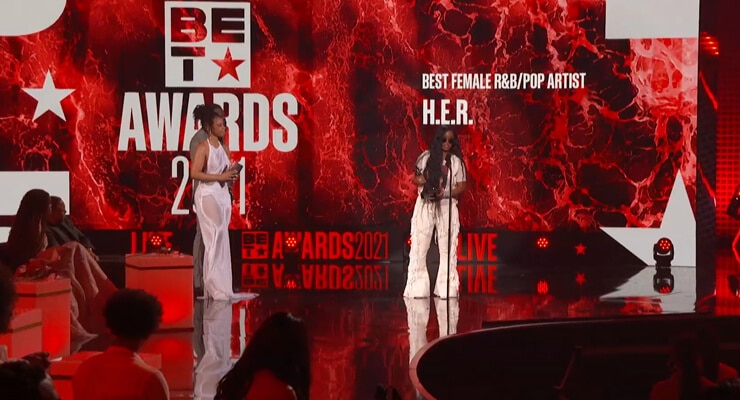 Tonight, BET hosted the 2021 edition of the BET Awards and this year there was a little some extra for the ladies as it was crowned the Year of the Black Woman. Hosted by Teraji Henson, women were literally front and centre with some of entertainment’s leading Black women seated in the front row.

The ceremony opened with a dose of inspiration from the unlikely duo of Kirk Franklin and Lil Baby performing their powerful track “We Win”, or as Taraji Henson called it — “church house meets trap house”.

The celebration of Black women continued throughout the night as they took home the majority of the awards, including Audra Day for Best Actress; Anderson. Paak and Bruno Mars, aka Silk Sonic, for Best Group; H.E.R. for Best Female R&B/Pop Artist; Cardi B and Megan Thee Stallion for Video of the Year for “WAP”; Megan Thee Stallion for Best Female Hip-hop Artist; SZA’s “Good Days” for the BET Her Award; Jazmine Sullivan for Album of the Year for “Heaux Tales”; Lil Baby for Best Male Hip-hop Artist; and Burna Boy for Best International Act.

As expected, there were also a number of performances on the night, including the red hot Moneybagg Yo, Da Baby, Megan Thee Stallion, Jazmine Sullivan featuring Ari Lennox, Roddy Ricch, City Girls, Silk Sonic, and DJ Khaled featuring Lil Baby and Lil Durk on their track “Every Chance I Get” and Megan Thee Stallion and Da Daby on their track “I Did It” with H.E.R. on guitar.

While most performers were good, there were some who went impressed viewers by going above and beyond, basically putting together mini-productions in their few minutes on stage. There was the Migos with their firy performance of “Straightening”, including choreography and LED background of volcanoes erupting and lava flowing. They followed that up with a performance of “Type Shit” off their recently released album Culture III with Cardi B appearing and shocking the world by revealing her soon-to-be born quarantine baby with husband Offset. Then there was H.E.R.’s performance that had the crowd buzzing after seeing her suspended above the crowd playing the drums, then being lowered to the ground and wowing them with a powerful guitar solo that would’ve made Jimi Hendrix proud. There was also Tyler the Creator with his first ever BET Awards performance, a highly creative and theatrical number worthy of a Broadway stage. Finally, there was also the “Lil Nas Experience”, an Egyptian themed performance of the singer’s hit “Montero”.

The night also saw two hip-hop legends recognized for their contributions to the culture. First, was Lifetime Achievement Award winner, Queen Latifah, with Rapsody, Monie Love, Lil Kim and MC Lyte paying tribute by performing some of the Queen’s greatest hits, including “U.N.I.T.Y.” and “Ladies First”.

After remembering those who we lost over the past year, the ceremony closed with any emotional tribute to the recently deceased DMX. The tribute opened with an acapella performance of “Where My Dogs At?” from Wu-tang rapper Method Man who then handed it off to Griselda for a performance of their recent DMX collab “Hood Blues” off his posthumous album Exodus. That was followed by a tribute from actor Michael Kenneth Williams and performances of “Ruff Ryders Anthem” by Swizz Beatz and the LOX and “Up In Here” by Busta Rymes. The tribute ended the same way X ended every show — with a prayer from the man himself.

This was more than an opportunity to celebrate Black achievements in arts and entertainment; it was about celebrating and owning our strength, beauty and impact on the wider culture. From Henson’s hosting to the quality of the performances and the moving tributes to two of hip-hop’s biggest legends, the BET Awards truly lived up to being “culture’s biggest night”.