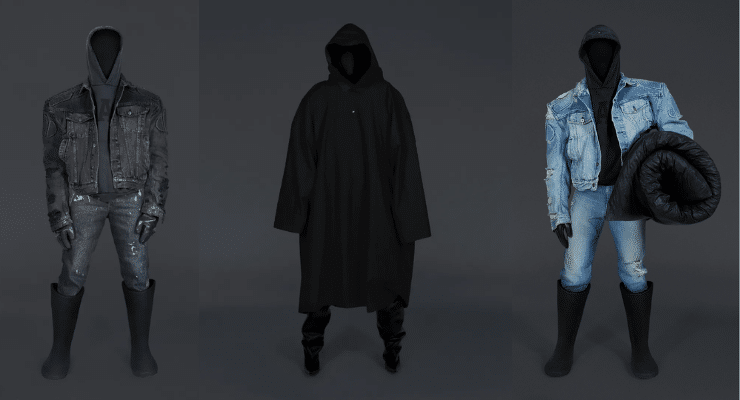 On February 23rd, 2022 Kanye West took to social media to unveil his latest contribution to fashion, a collaborative collection with Yeezy, Gap and Demna Gvasalia, the creative director of Balenciaga. Since 2020, Ye has been in a deal with Gap and he’s also been working closely with Demna on the vision of Donda. A collab between the three fashion forces was only natural.

The capsule, entitled “Yeezy Gap Engineered by Balenciaga”, is currently available for pre-order online exclusively at Yeezy Gap and Farfetch. It offers wardrobe basics for both genders like t-shirts, hoodies, denims and sweats with oversized silhouettes and an exaggerated flare priced between about $150 – $500 and more. Shades of mostly black and grey spread across the collection, though we do get some dusty blue and faded brown options as well as a pair of distressed jeans and utilitarian denim jacket. A dove graphic graces the back of the hoodies and t-shirts. Discover some of our top picks from the collection below:

Though the collection has only just gone public, it is highly likely that Ye was already sporting some of the pieces as early as  the start of the month at his Donda 2 listening party in Miami.

With the recent release of his three part documentary series on Netflix Jeen-Yus and an exclusive virtual reality shopping event at the top of this past Monday – that’s right, Jeen-Yus and SOBs held an immersive digital pop-up shop celebrating the 40th anniversary of Ye’s first concert at the legendary venue – there’s no telling what Kanye West has up his sleeve in the year to follow.

We’re already expecting Donda 2, and there is bound to be more style moments with the album on the way. More to come!