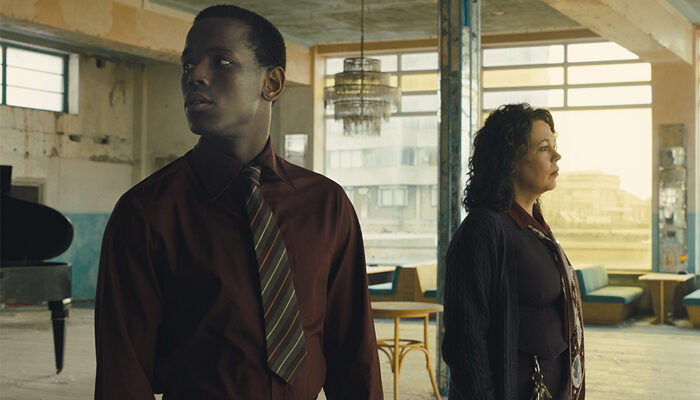 Another standout film from the Toronto International Film Festival is Empire of Light starring Micheal Ward, Olivia Colman, and Colin Firth. The Sam Mendes directed film is set in a small seaside town in England in the early 1980’s and tells the story of a group of co-workers in a local movie theatre. The story is centered around friends turned unlikely lovers, Stephen (Micheal Ward) and Hilary (Olivia Colman), who are separated by both age and race. Making matters even more complicated is increased racial tensions at the time, including the rise of the skinhead movement, as well as Hilary’s battle with mental illness.

The magic behind the film is the onscreen chemistry and mutual respect between Ward and Colman fueled by their offscreen friendship as Ward has been open about his respect for Colman and her impact on his approach to acting. Despite the age and race difference Ward and Colman are both steamy and believable as companions and lovers who exhibit true love and friendship through their worst moments.

The film is said to be about the magic of cinema, but it tackles so much more. The film explores race, interracial relationships, and mental health in a time period when those things were still taboo. But instead of suffering alone, our lead characters find solace in each other.

Adding to the beauty of the film is the location. The beautiful and quaint seaside town, which should be a getaway for the characters, is contrasted with the very ugly reality of the issues they are facing.

Ward delivers an award-worthy performance in this role as he defies the stereotypes of Black men, playing a gentle soul raised by a loving and hardworking mother, which is refreshing to see. Meanwhile, Colman delivers an award-worthy performance in her own right as she navigates the extremes of love and passion, as well as having a schizophrenic episode, then being medicated. The seasoned actor is challenged with almost playing three characters in one film and does so to perfection.

This film may not appear sexy to potential viewers at first glance, but it’s a must-see for anyone who likes a good old love story with an unconventional twist as it provides one of the more realistic depictions of true love that we’ve seen in a long time.

TIFF 2022 – THE WOMAN KING IS AN INSTANT OSCAR CONTENDER