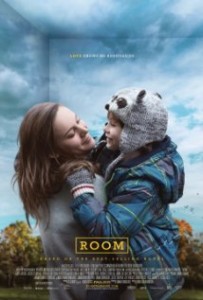 “Room explores the relationship between five year old Jack and his mother Joy “Ma” Newsome, from their time living their life in their captor’s one room garden shed and beyond, all through young Jack’s eyes. Minor spoilers ahead, if you haven’t seen the trailer or don’t want to, read my review after you’ve seen this movie.”

Ever since its premiere at TIFF a few months ago, Room has been lauded as one of the greatest films of the year, and completely lives up to its reputation. The film itself is split down the middle in terms of setting, the first half taking place in “Room”, the garden shed that Ma and Jack live in and the second half at Ma’s mother’s house, after their escape. Everything about Room is a masterpiece, the acting is some of the best this all year, the script itself brings tears (the good kind) and the cinematography immerses the viewer in the world as a sheltered five year old sees it.

One of the things that makes Room so incredible is the acting, much of it carried by Brie Larson. She portrays a young kidnapped woman, trying to be the best mother to a young child who hasn’t known anything but Room, while dealing with the fact that she herself has not seen the outside world in seven years. The best word to describe Larson’s performance is powerful; from Ma’s moments of strength solely rooted in the love for her child, to her moments of weakness dealing with being gone from the world since she was 17, Larson is an expert at her craft. She is currently being campaigned for Best Actress this year and should be a lock for at least a nomination.

However, despite Larson’s incredible performance, she is not the standout of Room. This honour falls to nine year old Jacob Tremblay, who puts on a performance that rivals Quvenzhané Wallis (Beasts of the Southern Wild) as one of the best child performances ever. The depth and range that Tremblay brings to the Jack shows talent beyond his years, perfectly balancing innocence and brokenness in the young child who endures horrors and trials that no child should ever go through. Don’t be surprised when you see this kid’s name being mentioned alongside Di Caprio or Fassbender in February during Oscar season.

Being a film that takes place through the eyes of a young child, the cinematography had to be perfect, and that it is. Shot by Danny Cohen, who won for The Kings Speech, the film whisks the viewer away to a world seen through the eyes of a child. From his naïve view of Room, to his daring escape, and his awe inspiring first look at the real world, the camerawork is perfect all the way through.

Other quick notes include the incredible adaptation from the book to the script, done by the author herself, the supporting performances from Sean Bridgers and Joan Allen and most notably the soundtrack. The use of The Mighty Rio Grande (also used famously in Moneyball) during Jack’s escape attempt helps to build the suspense for the audience and an overall thrilling ride.

Room is by far the best film released this year, from its achievements in acting, in technicality and in terms of raw emotional manipulation. Brie Larson and Jacob Tremblay are outstanding and absolutely carry the film, one that is as emotionally rewarding as it is devastating.