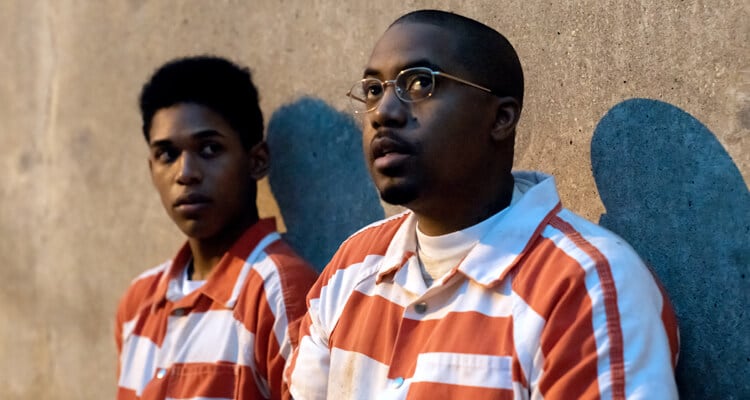 Seventeen year old, Steven Harmon (played by Kelvin Harrison Jr.) lives a normal teenage life in Harlem, New York – going to school, hanging out with friends, drinking, and going to the nightclub. Everything changes when he meets local street hustler, William King (played by Harlem rapper, A$AP Rocky), and his friend Richard “Bobo” Evans (played by John David Washington) who attempt to introduce and lure Steve to the darker side of life in the neighbourhood.

After a bodega robbery gone wrong, Steve finds himself behind bars, a victim to the system. Not only does the unfolding drama take a toll on Steve himself, but on his loving parents played by Jennifer Hudson and Jeffrey Wright.

While in incarceration he meets fellow inmate, prison OG, and source of wisdom and reason, Raymond “Sunset” Green (played by Nas), who provides the much younger Steve the fuel and healthy dose of truth needed to help him fight his case.

Based on the book of the same name written by Walter Dean Myers and executive produced by John Legend, Nas and Jeffrey Wright, Monster tells an all too familiar story of racial injustice in inner city America where young Black men are profiled and labelled as “monsters”. The film is narrated by the lead character providing a look inside the mind of the falsely accused. It is also a look into inner city life through the eyes and lens of the young photographer and aspiring filmmaker. The overall theme of the film is not only “truth”, but “trust” as it forces us to question who we can and cannot trust. Not only does Steve have to learn how to trust his attorney Katherine O’Brien (played by Jennifer Ehle) and his parents have to learn to trust him, but he is forced to place his trust in a system that has failed many like him.

Where this film differs from other depictions of inner city life is in the positive family images, whether it’s the intimate father-son relationship between Steve and his father or the marital relationship between Mr. and Mrs. Harmon, adding to the sense of injustice in the story.

The standout actors in the film are too many to name as the ensemble cast all shine in their respective roles. Where the film falls slightly flat is in the ending. The build up to the climax is a bit lacking leaving you wanting a bit more. Nevertheless, it is overall a good film about a very important and timely subject.

Monster is available Friday, May 7th on Netflix. Click the header to check out the trailer.

REVIEW – BIGGIE THE RAP SUPERSTAR GIVES WAY TO CHRISTOPHER THE MAN IN BIGGIE: I GOT A STORY TO TELL