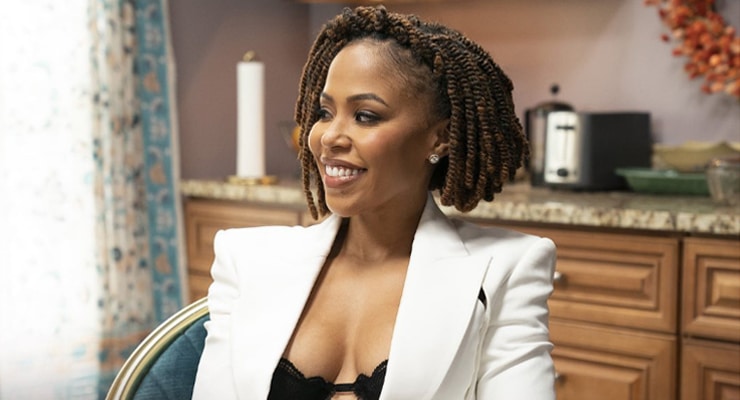 Now that the season is over, let’s take a look back at the top five biggest moments from Tyler Perry’s Sistas Season 4.

Season four of Tyler Perry’s Sistas was full of drama as all the characters grew and evolved. Old couples broke up, new ones forms, and friendships were tested.

Now the season is over, let’s go back and take a look at some key moments. Here are the top five biggest moments from Season 4 of Tyler Perry’s Sistas, episodes 12 to 22.

Karen’s appointment at the doctor was a defining moment with a strong build up. I mean, she was there for about three episodes.

The appointment confirmed what fans already knew; Aaron might be the father of her child. We also saw glimpses of what may have drawn her to Aaron in the first place after they shared a brief sentimental moment. The whole appointment captured the complexity of their situation. It was after this appointment that Karen really got honest about how she felt about Aaron and Zac. Being stuck in a room with a clingy Aaron, and having to face the idea of him potentially being the father of her baby, forced her to confront her emotions.

This is one of the moments we all were waiting for. After coming at the woman he loves, landing her in jail, and meddling in his business, Zac puts his hands on Hayden after he celebrates putting his “bitch” in jail. Surprisingly, we haven’t had many Zac vs. Hayden moments. Hayden has had more run-ins with Andi and Fatima, showing what kind of man he is, but this was Zac finally getting to deal with him (and that he did).

This was another story that had a strong build up. Gary was in his office for about three episodes, beside himself as he grappling with his emotions around Andi and Robin making love in the apartment he bought. These scenes actually made Aaron look like he had a backbone.

The whole time viewers were left wondering how Andi would react when she fond out Gary was watching her from across the street. Their final standoff was passionate, explosive and messy. Gary revealed he was the same jealous and obsessive nutcase he always was and Andi stood up for herself. She showed growth from the gullible, delusional and almost childish Andi we saw in previous seasons.

4. Sabrina and Maurice get arrested

We don’t anything about how Sabrina and Maurice got implicated in Bayo’s mess, but this is undoubtedly one of the biggest moments of the season. We all know Maurice is going to be a mess in jail.

It will be interesting to see how the dynamic in his relationship with Que will change now that he’s the one in jail; especially since Que seemingly played a role in him being there.

You can’t have a list about the biggest moments from season four without Fatima. The only problem is which moment to pick.

There was her smashing Hayden’s place with a baseball bat to open the season. That moment really established what we would expect from her character for the rest of the season.

There was her standoff with Karen in episode 21. After overhearing Karen and Zac talking downstairs to end episode 20, Fatima comes for a distraught Karen’s neck. She was a bit of a bully, but she was hilarious at the same time and quick with the one liners. The whole scene was entertaining and funny.

Then there was her standoff with the Senator’s wife where she made quick work of the thirsty divorcee after her presence loomed over Zac for a few episodes. In the end, Fatima was a moment unto herself.

Are there any moments we forgot? Hit us up on Twitter and let us know!