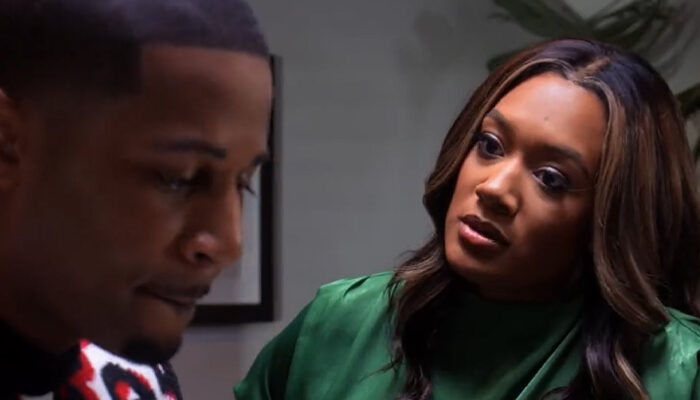 Gary is out for blood. Zac finally confronts the Senator’s wife, but he doesn’t do it alone. Here’s our Tyler Perry’s Sistas Season 4 Episode 22 recap.

The finale begins with Zac responding to the Senator’s wife’s proposition and her threats of him going to jail. No stranger to being behind bars, he peaces out leaving her alone.

Fatima sits down with Andi as she stresses over Hayden’s threats against Zac. Fatima tells Andi that Zac is a good man, but she questions his judgment sometimes. Despite her relationship with Karen, Andi gives her some solid advice about holding onto Zac if she thinks it’s real. But Andi is having some relationship issues of her own as Gary shows up at the law office to “see his lawyer”. When Fatima thinks he’s talking about Andi, he replies, “That bitch ain’t my lawyer” (apparently he’s still salty from last episode’s drama). Gary gets advice from Hayden about suing Andi and getting the apartment and car back.

Zac once again meets up with the Senator’s wife at her hotel room but he can’t go through with it. As Zac tries to leave, Fatima shows up at the door and confronts the Senator’s wife. With a few threats she does what Fatima does and fixes everything. Based on her conversation with Andi about questioning Zac’s judgment, it’s not farfetched to think Fatima was testing Zac all a long to see what he would do.

Meanwhile, Sabrina runs into Bayo at the store. After some awkwardness, Bayo explains that Danni resembles the women from a special tribe in his country explaining his fascination with her. After he shows Sabrina some pictures of said women, she agrees and believes him, but it still sounds a little sus if you ask me.

The Logan storyline continues as he shows up at Danni’s work, asking if she said anything to Sabrina about his investigation. She lies saying she didn’t tell Sabrina anything, but then basically admits that she can’t sit there and not say something to her friend. But that’s not her only visitor at the airport. Preston shows up letting Danni know he’s leaving town and heading home to the country. They share an emotional goodbye, one of the highlights of the episode. He professes his love for her before turning around and getting on his flight. She clearly doesn’t want him to leave, but after he tells her to not say anything that will make him want to stay, she accuses him of running again under her breath.

Karen might be in for a heartbreak of her own. While talking with Pam in the shop (which actually has customers) she starts feeling sick. Pam notices she’s bleeding, setting up a potentially heart wrenching storyline for next season. If we thought Karen was a mess this season, imagine what we’re about to see next season.

To close out the episode, Maurice comes into the bank smiling about his “late night”. While Sabrina fills him in on the latest Bayo drama, Logan busts in with the FBI and arrests Sabrina and Maurice for bank robbery.

With a strong buildup to the finale with episodes that left us on the edge of our seats, the finale episode felt a little flat. Again, Preston and Danni’s scene was strong, as was Fatima confronting the Senator’s wife, and they setup the Karen pregnancy story for next season, but overall this episode left a lot to be desired. We’ll have to wait a few months to see where they go with all this.