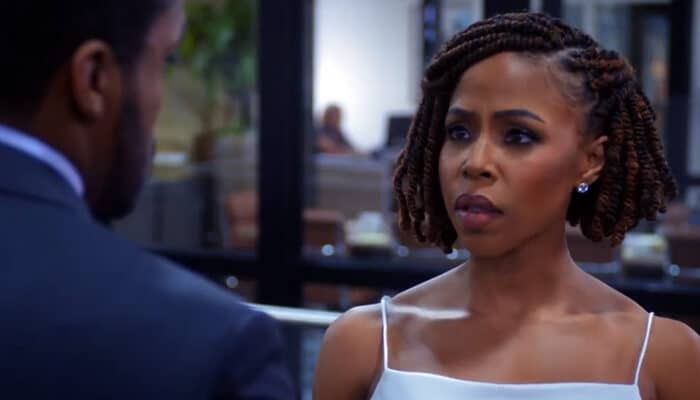 Karen and Aaron go to the doctor to get more answers about her pregnancy. Hayden and Andi clash over Fatima being in jail. Here’s our Tyler Perry’s Sistas Season 4 Episode 13 recap.

The episode opens with some pleasantries between Andi and Gary, but’s it’s short lived as Andi suspects Gary is up to something. She hires Thai “The Thaiga” to do a security sweep of her apartment, looking for recording devices.

But this is the least of her worries. After asking Hayden whether he’s telling Gary when Robin is in the office, she learns Fatima is in jail setting up a legal battle between Hayden and Andi. When she visits her in jail we learn more about Fatima, her past, and how much where she grew up shaped her. Basically, she’s a thug. After knowing very little about her in previous seasons, the evolution Fatima’s character has added depth to the show.

Meanwhile, Karen and “Mr. Nice Guy”, Aaron, are at her doctor’s appointment. He starts out being a bit too eager and extra, but as she asks, “Why are you being so sweet to me?”, you see he’s a solid guy that you have no choice but to respect. After they talk about their parents and upbringing they share a nice bonding moment, but as soon as you start liking him, he goes back to being suffocating and over the top. Why Aaron? Why? Just when we were starting to like you. If “doing too much” was a person it would be Aaron. He must be stopped.

Later in the episode, Karen finds out she’s four weeks pregnant, raising questions about who the father really is.

One of the ongoing bright spots is the growing friendship between Zac and Preston. After always seeing Zac with Fatima, it’s nice to see him bonding with another dude. While the two get the new house ready for Fatima, Zac shares this is the happiest he’s ever been in his drama free relationship with Fatima (little does he know). Not only do they bond over their relationships and the similarities between Danni and Fatima, but Zac is the voice of reason, giving Preston some sound advice, all while delivering some of the funniest scenes in the episode as he imitates the women. You gotta see it for yourself.

Danni continues to be a minor character since the mid-season return, but we imagine her story will pick up as the season goes on. After he gets emotional reuniting a missing girl with her family, Danni asks Logan out to dinner. He’s a character we would like to see more of. He’s the anti-Aaron; a solid guy who is sensitive but not corny.

The episode closes with a long sequence with Sabrina and Maurice, who provides the episode’s other great comedic moment (as usual). Maurice grills Sabrina about her relationship with Bayo, and gets “moist” while encouraging her to get her groove on with him. Q walks in and tries to make it right, but Maurice still isn’t having it. Fans who joked about there only being one customer in the bank were heard. You’ll be happy to know the bank is looking busier these days.