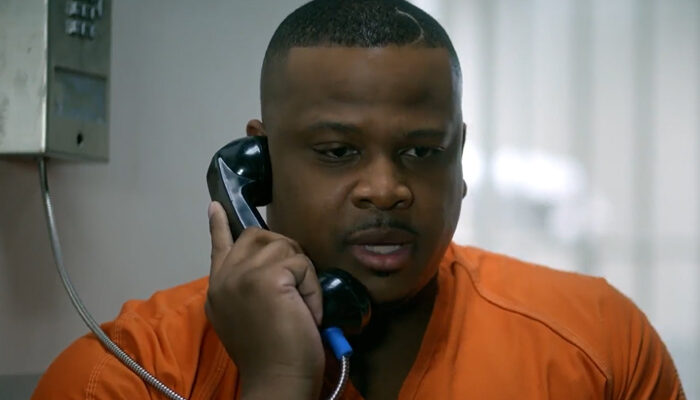 Maurice stands firm but for how long?

The episode opens with a defiant, f-word slinging Maurice refusing to succumb to pressure from the prosecutor to make a statement against Sabrina. The prosecutor is trying to convince that Sabrina turned on him but fortunately he knows his friend. After the interrogation, Maurice calls Calvin from jail wanting to know if Sabrina ratted him out and why Sabrina is out. He’s having doubts. Calvin pays Sabrina a visit and tells her Maurice is wondering if she ratted him out, leaving her a little worried he might cooperate with the prosecutor. Bayo makes his season debut as he walks in to check up on Sabrina. As a mean mug from Calvin and Sabrina reassuring him she’s okay, he decides to leave. Alone again, Sabrina asks Calvin to stay and talk.

Is Fatima doing too much?

At the law office, Andi congratulates Fatima on her engagement but the good vibes are cut short when Fatima shows her Tamara, aka “the plant” she hired to get Hayden. As the conversation goes back to her future with Zac, Fatima says wants to see how Zac handles Karen, if it’s his baby, and whether he’ll have to pay child support before agreeing to marry him. As she brings up the baby, Fatima can tell that Andi knows something. Despite the stereotypes, the lawyer isn’t a good liar.

Meanwhile, Hayden meets up with the plant and she’s pouring on the compliments. She gets embarrassed when she sees he’s hard. She invites him over to her house for a drink. The man’s falling for it, hook, line and sinker. Tamara calls to give Fatima the latest on Hayden when Andi and Karen pull up.

At the airport, Que offers to walk Danni back to her car while asking her to go out for drinks. At first, she’s not feeling it, but eventually she agrees. They go out for drinks when Que tries to get Danni to take him to meet her friends, but she’s not interested. When Danni gets home, Preston wants to talk about someone hitting her and her hitting someone with her car. Apparently, the landlord has a big mouth, but Danni doesn’t want to talk about it.

In the latest Zatima news, Zac waits for Fatima outside the house as she comes home to give her a surprise. He leads her into the house to find a nice dinner including some “premium gas station wine” (she deserved better buddy). He asks he to go to the Justice of the Peace to get married, but she’s not trying to do that. A DD (“dick deprived) Fatima wants him to talk to Karen and Heather before they eat (and have “dessert”. Fatima is DD.

The scene switches to the salon (I was today years old when I found out Karen’s salon is called Karen’s Hair Mastery). Sabrina is feeling like her old self again with her braids. Of course Pam has to chime in with her fast self talking about loving Sabrina’s natural hair. Clueless and out of touch. That’s when Zac calls to ask Karen to come over to talk about the baby. After Karen let’s her know she’s going over to Zac’s house, Andi decides she’s coming too.