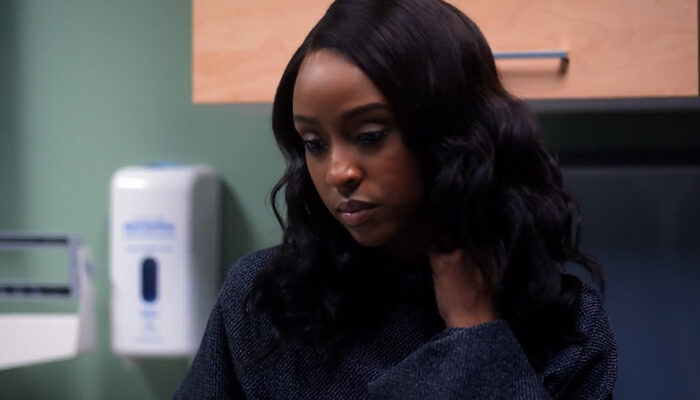 Karen confirms the father of her baby and Robin tries to fight a hostile takeover. Here’s our Tyler Perry’s Sistas Season 5 Episode 12 recap.

The episode opens with Calvin continuing to lay a beating on Que with his golf clubs. While hobbling to the door, Que promises revenge so this is far from over. Sabrina thanks Calvin for sticking up for her as they share a good moment on the couch. They’re both worried about Maurice. You can see in Calvin’s eyes that he cares for her.

At the doctor’s office, Karen reveals the baby is Zac’s after finding out the conception date, but the girls seem to have doubts . The girls head back to Andi’s place to talk it over.

Zac pays Fatima a visit at the law office and fills him in on his meeting with the lawyer. Following the lawyer and Fatima’s advice, he will meet with all the baby moms, but Fatima wants to be there. While they’re talking, Hayden comes by and serves Zac his court papers for the paternity case involving Heather. Next, Andi pulls up the Fatima’s office, but she doesn’t spill the beans about Karen, Zac and the baby. She’s on a mission to find Robin who soon confides that he took on a lot of leverage to buy the firm and the partners are now forcing a call. He’s onto Gary and Hayden’s attempts to take over the firm and Andi lies that she didn’t know. His share is $14 million dollars that he doesn’t have. Andi wants to introduce him to someone who can help, but encourages him to fight.

Karen returns to the salon for work and meets with Aaron to tell him the news about the baby. As expected, he still wants to stand by her. She’s impressed with his goodness and they enjoy a lunch together. Feeling violated after her time in jail and being forced to go back to her natural hair, Sabrina comes to the salon to get her hair back to how it was before her incarceration.

Meanwhile, Fatima is back to her scheming ways. She asks Madam to send over a woman who can catch Hayden slipping and fleece him for everything he has. Of course, Hayden, a sucker for a beautiful woman, falls for it (for now). Before she leaves the office for the day, Fatima gets the lowdown from Andi about her talk with Robin. Fatima thinks Andi looks suspicious like she’s hiding something, but Andi turns the tables on her, pointing out the tan line on her ring finger.

At the airport, Que tells Danni he got into a fight after he saw Jonah waiting for her on the street. He tries to find out what happened between him and Danni, but she’s not sharing any details. He looks for a “thank you” but she’s not giving him one. Trust Danni to find some humour in the situation though. “So you let an injured man beat your ass?” she replies to him almost laughing. “You full of shit. You probably got bit by a dog or something.”

The episode closes with Maurice refusing (again) to give a false statement about Sabrina. The prosecutor lies that Sabrina is already free and ratted him out which has him a little shook.