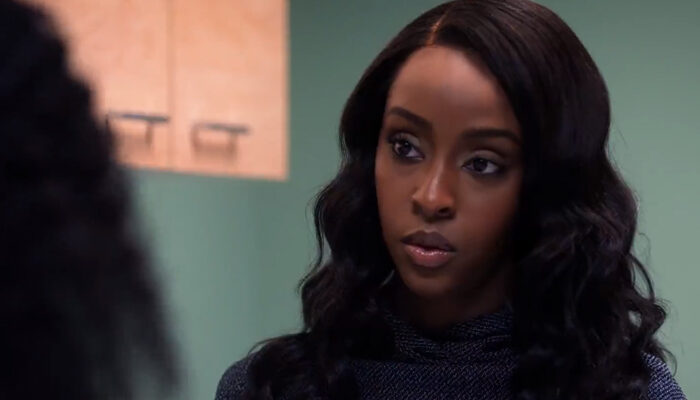 Sabrina is released from jail and has a run-in with Que, Karen goes to the doctor to find out her conception date and the father of her baby, and Danni and Preston spend the night together. Here’s our Tyler Perry’s Sistas Season 5 Episode 11 recap.

The episode opens with Robin and Gary at Karen’s place. Robin came over because he has something important to share. It turns out he can get Sabrina out of jail in the morning, but it may take $3 million in bail; money Andi doesn’t have. She asks Robin to lend her the money and he agrees to help.

Danni and Preston wake up together in bed and she doesn’t want him to leave. When Preston goes to the bathroom, Danni does a little snooping and finds a ring in his pocket, but who is it for?

In the latest Zatima news, Zac fills Fatima in on his run-in with Hayden at the basketball court. Zac then presses Fatima about not wearing her engagement ring to work. It turns out she doesn’t want Andi to know just yet in case she tells Karen. Later in the episode, Zac gets some legal advice about his alleged baby mommas suing him. “The math ain’t mathing” as he learns they can each sue him for 50% leaving nothing for him.

Meanwhile, after convincing her to not go to the salon the night before, Aaron and Karen have breakfast together before sharing a cute “I love you” moment as he heads to the office. Karen heads to the salon and finds that Pam left a curling iron on, proving she was right in now trusting her. Thankfully, there was no fire after all. That wouldn’t have been good for both Pam and Aaron.

Continuing from last episode, Gary and Andi have some more “fun” together, giving him a false sense of security. After feeling like Robin is no longer a threat, he starts to let his guard down about his plans to take over Robin’s firm.

Later at the courthouse, Andi seeks advice from Danni about the information she knows about Gary’s move against Robin.nWhile Maurice refuses to give in to pressure from the prosecutor to turn on Sabrina, she is finally released, although she’s clearly shaken. She finally arrives at home, but the girls can’t stick around since they have to go with Karen to her doctor’s appointment. Calvin calls to check up on her, letting her know Que was at Maurice’s place. Sabrina decides to pay him a visit with Que being his usual smug self. Unfortunately, he pushes Sabrina and Calvin to the edge.

At the doctor’s appointment, Karen is feeling a bit nervous. She learns the exact date the baby was conceived, but the identity of the father is still left up in the air to use viewers (although she clearly knows).