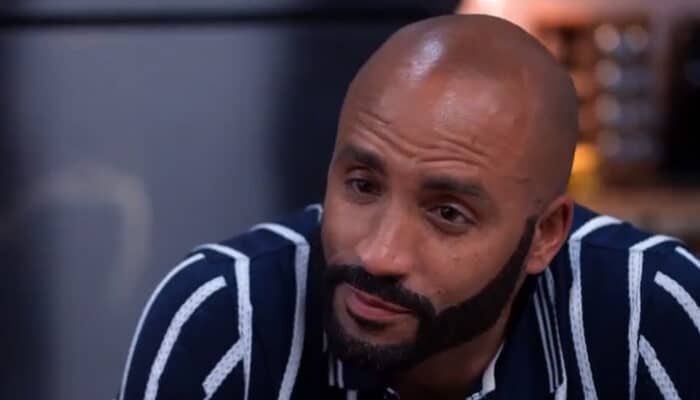 Karen learns about Sabrina being in jail and Robin agrees to help. Here’s our Tyler Perry’s Sistas Season 5 Episode 10 recap.

Danni is alone with Sabrina and tells her more about Maurice and about Bayo. She doesn’t want to leave, but with the threat from the prosecutor, Andi pulls Danni out of there.

This is followed by more warm moments between Aaron and Karen. He turns on some charm as she responds, “You make it hard. Even when I’m mad, I can’t stay mad.”

They share a few jokes and, again, show us that they have what it takes to have a real relationship. She lets him know that she’s going to the doctor to get the ultrasound so she can narrow down who the father is. He’s coming on a little strong and assuming it’s his, but not to the point of being annoying. Aaron and Miss Lisa are building a good, dare I say, “mother-son” relationship. She texts Aaron who in turn lets Karen know her mom was about to call her. I have to admit I like how this soon-to-be love story is unfolding.

In the latest Zatima news, Fatima talks to Zac about Heather and Karen and the probability of being both of their babies’ daddies. Although she’s not loving the situation, she puts herself in the position of the women and understands. But her real fear is around them getting married and Zac’s potential legal debts becoming hers in light of Heather meeting with Hayden and starting a legal battle.

As Danni and Andi come over, Aaron dips but tells Danni she can’t smoke at Karen’s because of the baby. With Aaron gone, the girls finally tell Karen that Sabrina is in jail. Karen in turn tells the girls about the ultrasound and asks them to come with her.

Their reunion is interrupted by an unexpected call from Robin who apologizes and offers to help Sabrina. Then Gary calls on cue from the basketball court to see if he can see her later. Andi tells him to be at her place, in her bed, with his clothes off.

As he hangs up from the call, Gary tries to talk to Zac, who is also at the court, but he wasn’t about it. Then Aaron tries to get Zac on his team but he wasn’t about that either. To make the scene even more entertaining, Hayden pulls up too (Who is he kidding? He can’t play ball). Zac and Hayden go back and forth taking jabs at each other, but Zac decides to go home to avoid hitting Hayden and going to jail. It’s rare for us to see the men of Sistas share some screen time together so the whole Zac, Aaron, Gary and Hayden scene was a treat. More of that please.

With the other guys gone, Aaron tries to make peace with Zac―“I’m not your enemy, brother.” Zac doesn’t want to be cool with him. He says he hates Aaron, but also hates himself for liking him more every time he’s nice to him (I hear you Zac. I’m hating myself for starting to like him too).

While Andi was on the phone with Gary, Danni filled Karen in on all of Andi’s business. Andi in turn gets petty and tells Karen about DAnni being spat on by Jonah. Messy.

As the scene switches over to the salon, Pam is left to lock up but gets careless leaving a flat iron plugged in, hinting at a potential fire. Karen doesn’t trust her and wants to check on the salon but Aaron convinces her not to go. Damn you Aaron!

As the episode draws to a close, Danni finally meets Preston face to face outside of her building. Preston puts the ball in her court and basically lets her choose what happens next. She admits she doesn’t know what she wants. One day she wants to be with someone and the next day she wants to be alone. She’s afraid she’s going to hurt him. They agree to go inside (while holding hands).

To close out the episode, Andi comes home to find a fully clothed Gary sitting in the living room, but it turns out he’s not alone.