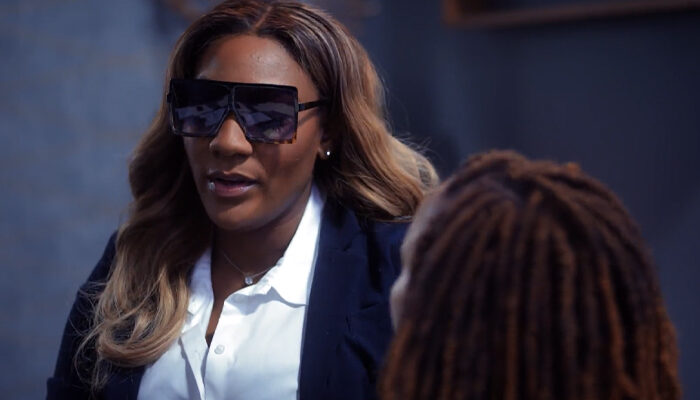 Robin is onto Hayden, Karen is back at the salon, and Danni needs a lawyer. Here’s our Tyler Perry’s Sistas Season 5 Episode 8 recap.

Karen calls Andi and finds out Danni is still mad at her, but Miss Lisa’s kumbaya experiment worked after all because she feeling like her old self again. But Miss Lisa has some questions about what Fatima said about Karen’s cycle and counting the days, and ovulation…Sorry, I’m a guy.

This episode, we find Gary in bed at Andi’s house. As she leaves the house she wants Gary to leave, but he’s comfortable since they used to live together. As they say, old habits die hard. With Gary in the shower, Andi does more snooping in his stuff to find out what he’s planning against Robin.

Meanwhile, In the latest Zatima news, the dust has settled on the Karen fiasco and Fatima is prayed up and zen. Zac and Fatima have a great moment, but Tima is a little skeptical when he offers to take her on a date. Is he hiding something?

At the law office, Robin calls Hayden into his office and lets him know he traced the email about Andi and the janitor back to him. Robin threatens to fire him if he tries something like that again. Robin wants to talk to Andi to clear up everything but she ain’t having it.

When Fatima finds out the judge didn’t call Andi back, she lets Madam know. Two-twos, the judge calls back to let Andi know she can see Sabrina. Unfortunately, she can’t reach Danni and we know why.

Karen returns to the salon for what seems like the first time this season, but she isn’t staying according to Miss Lisa. Andi walks in and it’s only now that it sinks in that Karen knows nothing about what’s happening with Sabrina. Wow. With all she’s gone through, it looks like Andi is trying to keep her in the dark. But Karen has her hands full with her mom. Miss Lisa is overstepping getting on Karen’s nerves. She even reached out to Aaron who is offering to help take care of Karen

To end the show, a sunglasses-wearing Danni goes to the office to meet Andi. When she finds out Andi isn’t there she talks to Fatima. But Andi shows up soon enough. Danni asks for her for a lawyer. Just when we thought it was to press charges against her abuser from last episode we learn she may have killed him. Plot twist.