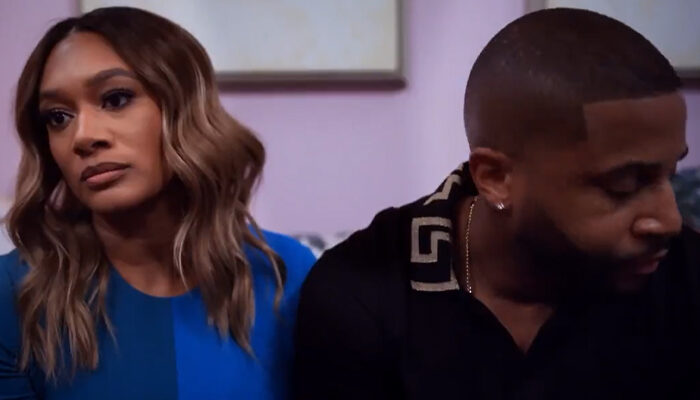 The episode opens with Fatima unexpectedly joining the Kumbaya party at Karen’s house. As Karen opens up about her feelings, we learn she basically blames Zac for everything, including not being able to receive love from a good man, aka Aaron. While she hates him for all he put her through, she wants the baby to be his and hates herself for still wanting to be with him.

Aaron, aka Mr. Perfect, aka Preacherman, still wants to show her a healthy and loving relationship. Zac gets petty and dark reminding Aaron that his ex-wife “offed herself” in Karen’s salon. Damn Zac. After that things get heated between Zac and Aaron. I mean, who can blame him?

Just when Zac tried to bounce, Fatima wants to talk to Karen about calling her a bitch. Even Miss Lisa tells Karen to apologize for that one. Karen ain’t having it though and the whole Kumbaya experiment blows up in Miss Lisa’s face. Later she confides in Karen that “The Accountant” seems too good to be true―“I want to know what he’s hiding”. She then wonders if Karen’s hesitancy with Aaron is more about that than the fact she still loves Zac. Miss Lisa might be onto something.

Hayden gives Gary some intel on Robin being “leveraged to his eyeballs” and not as successful as he looks, but Gary tells him not to underestimate him. Hayden is still convinced Andi is playing Gary. They bet over whether Andi is with Robin and Gary wins the bet.

Meanwhile, Que is even more of a piece of shit than we’ve ever seen before(pardon my language). He has people up in Maurice’s house eating food, doing drugs, and stealing things. He even sold Calvin’s golf clubs that belonged to his dead father and used the money to buy drugs. Like previous episodes, he laughed in his face and called him a bitch. The level of restraint Calvin exercised was impressive. Que deserved to get punched in his face, but we have to assume Calvin will get even soon.

Danni and her married man are getting freaky, but apparently he doesn’t know what he’s doing and he has a micropenis. Dude is a mess. He has no coordination in the bedroom. Andi says she’s using him to cope with Preston. When she asks him to leave, he starts to show some toxic behaviour referring to her as one of “these bitches” and saying “You got me hot and bothered, then told me to stop”. She goes in on him making fun of his micro-penis, and he responds by hitting her. Small dick energy. Between him being trash in the sheets and his abusive behaviour, now we know why his wife is so grumpy and unhappy.

When Gary finally arrives at Andi’s place she goes through his jacket and sees paperwork about his move on Robin. Yup, she’s about to snitch to Robin. Stay tuned.