RBC Bluesfest, Ottawa’s largest music festival, is back with another eclectic lineup in celebration of its 25th anniversary. Returning this year is festival favourite Snoop Dogg who will headline a hip-hop night on July 13th along with legendary hip-hop group Wutang Clan. Other hip-hop and R&B acts include Logic, K’Naan, T-Pain, Mustard, mega producer Murda Beatz and Jessie Reyez, who also graced the Bluesfest stage in 2018.

In 2018, the big draw was the Foo Fighters who treated fans to a three hour show on the big stage. In 2019, the big draw is the Backstreet Boys on July 14th.

Whereas the local lineup in 2018 leaned more heavily towards hip-hop, the local offering in 2019 leans a little more towards folk and rock, with acts like Mia Kelly, Area Resident, HOROJO Trio, Silent Winters and Moonfruits. Also included in the local lineup are names like Mia Kelly, Blak Denim, GARÇONS, and The Launch contestant Vi. Missing from the lineup are local hip-hop and R&B acts like SVLM, BLikeBrett and Dax, one of the world’s biggest YouTube rappers who is now transitioning into the mainstream. More acts are to be announced in the coming weeks. 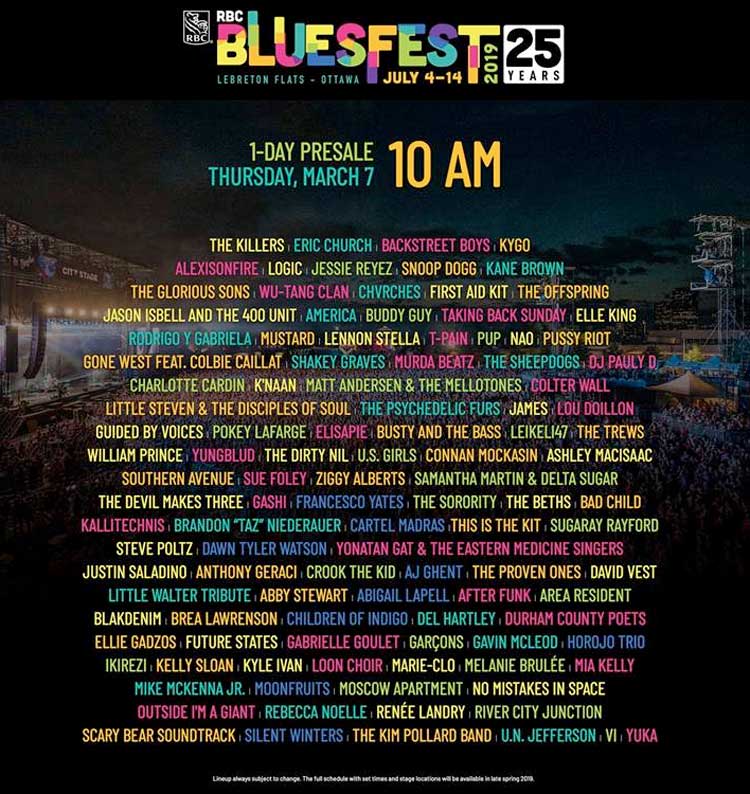