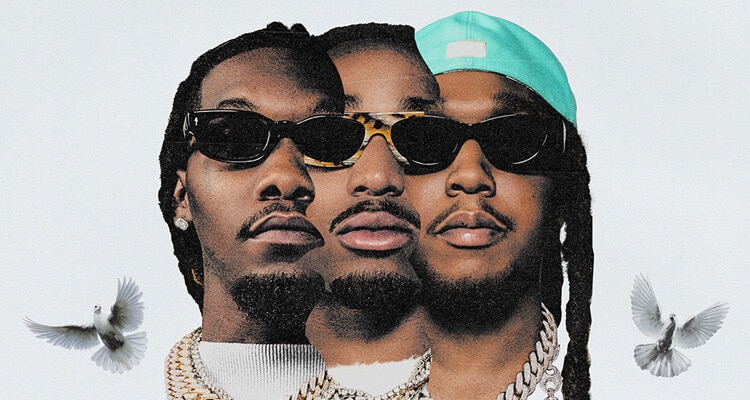 It feels like just the other day that Migos were a part of a cohort of “rumble rappers” that were considered harbingers of the impending downfall of hip-hop, at least among some hip-hop purists. Now four studio albums, three solo albums, one EP, twelve mixtapes and forty-seven singles deep, they’ve obviously evolved into global superstars who have helped to secure Atlanta’s place at the top of the hip-hop food chain.

For years, it seemed as though the trio were settled into stardom and enjoying the finer things in life (like love), that is until a recent high profile breakup between Quavo and Saweetie. Some fans wondered if the fallout from the public beef would somehow impact their music for the better. Well, that was answered with their next release, “Straightening”, the lead single off their upcoming album. The record revealed a hungrier version of Migos that we haven’t seen in years setting the tone for what we may expect from the project.

Well, the wait is finally over. Today, they dropped Culture III, the third and final installment in the Culture trilogy. Aside from previously released tracks like “Need It” featuring NBA Youngboy and “Straightening”, which has racked up over 52 million worldwide streams and over 21 million views on YouTube, the star-studded list of features also includes Drake, Justin Bieber, fellow Atlanta rapper Future, the scorching hot Polo G, the late Juice WRLD and Pop Smoke, and Cardi B on the Tay Keith produced and music video worthy track “Type Shit”.

Aside from the big features and club ready records, what also stands out is the contrasting maturity and depth sprinkled throughout the album. On his solo project Father Of Four, considered by many to be the best of the three Migos solo albums, Offset set the tone for what a mature Migos album could sound like with his maturity and vulnerability on tracks like “Father Of 4”, “How Did I Get Here”, and “Red Tent”. Some of that formula did, in fact, ended up on this album on songs like “What You See” featuring Justin Bieber, “Antisocial” featuring Juice WORLD, “Handle My Business”, and “Time For Me”.

The group also celebrated the release of the album with the new music video for “Modern Day” produced by Murda Beatz and Jordan Fox. Created by Wyatt Winfrey, it features a jewellery -wearing, jet-flying, boat-riding Migos enjoying some leisure and luxury.

Although this is far from the final Migos album, it’s a fitting end to the Culture trilogy, foregoing the mainstream sounds of recent years and returning to the energy and hunger of Culture I.  It has enough gutter yet entertaining content to satisfy the streets while including enough mature content to show how much they’ve evolved as both men and artists. Overall, it’s a good project that crosses all the “t’s” and dots all the “i’s” and has a little “sumthin’ sumthin'” for everyone.

Culture III is available on all major streaming platforms.