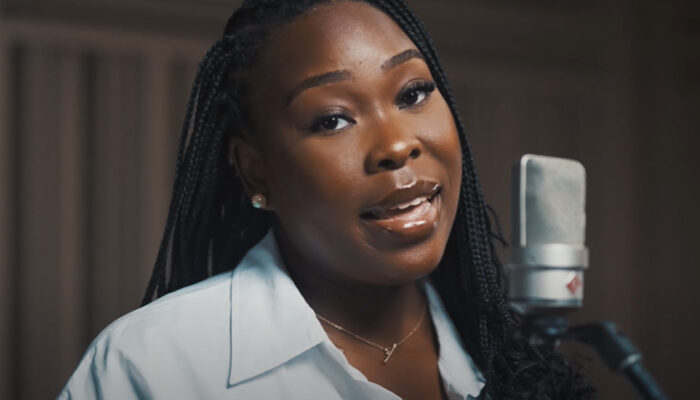 Nigerian-Canadian artist Nyma has been gaining steam since her debut, even earning recognition from a certain international Nigerian superstar. Here’s a look at her acoustic video for “Mr. Man”.

While Ottawa’s winter weather has many people feeling down, Nyma is giving us refreshing and vibrant music to lift our spirits. Her harmonious voice has gained her quite the reputation in the snowy city, yet she also rocked a recent performance in Toronto opening for Simi.

Nyma’s first song was “Wavy” which launched her into the music industry. Her first exposure to music was hearing her father play Afrobeats growing up.

For her music was therapy. When she wanted to deal with frustrating emotions, she went online to find a beat and began recording and posting. That’s when Nigerian superstar Davido recognized her. Since then, she has maintained creative consistency by using love as a focal point. While “Wavy” and her covers gained some recognition, Nyma’s more recent track “Mr. Man” had listeners paying attention.

“Mr. Man” follows in the footsteps of Nyma’s previous releases being in the Afrobeat style. However, last month she recorded an acoustic version which further showcases her talented vocals. The acoustic and original performance videos are dynamically shot by Ben Telford to capture Nyma’s positive presence. “Mr. Man” is beautifully smooth and understated which makes it an easy-listen. A commenter on social media even said the song reminded her of a female Wizkid with a sprinkle of R&B. To add the cherry on top, “Mr. Man” made it onto Apple Music playlists “Future Hits”, “Afro-Soul Mix” and “New Music Daily.”

As Nyma continues on her musical journey we can’t wait to see her evolve in her own artistic right. Until, check out the acoustic video for “Mr. Man” and let us know what you think.