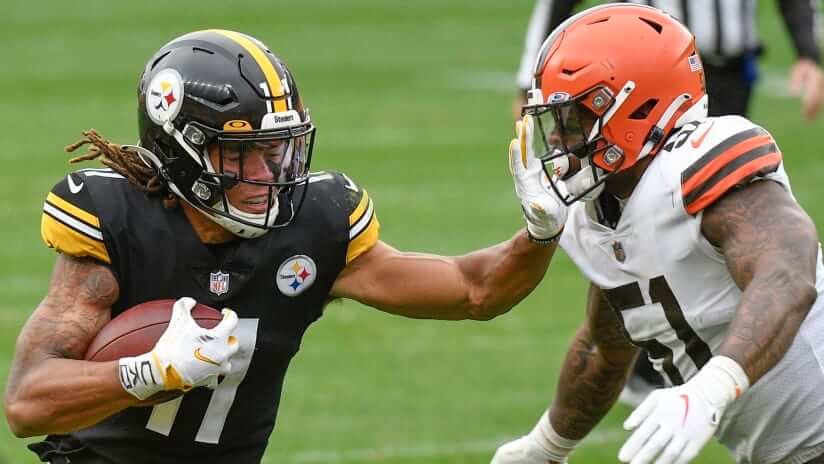 Chase Claypool has quickly gone from rookie to household name virtually overnight in a statement game. It’s safe to say that at the time Claypool was drafted, it wasn’t to replace Antonio Brown but more to facilitate the pain and transition into a new era of wide receivers in the great city of Pittsburgh. How swiftly that idea has changed.

Selected in the second round of the NFL Draft (49th Overall), Canadian-born player Chase Claypool came into the locker room as the third ranked receiver on the depth chart, ready to fight tooth and nail to make a name for himself, yet, his competitive mentality and natural feel for the game allowed him to quickly win over the trust of the coaching staff, and the hearts of the fans as well.

Born in Abbotsford, British Colombia, Claypool grew up idolizing LaDainian Tomlinson, which is why he is no stranger to making big plays. After losing arguably their two best players (Brown, Bell), the Steelers were adamant about reinvesting draft capital into their depleted offense. If the front office ever had any doubts about him, they were laid to rest last week when Claypool exploded for four total touchdowns (3 Rec TD, 1 Rush TD) in a 38-29 victory over the Eagles. Not since 1968 has Pittsburgh had a player score four touchdowns in a game. For such a rich, historic franchise fostering many Hall of Famers, it’s quite surprising. He is also the only rookie in Steelers history to haul in four TD’s in a game. Not Franco Harris, not Lynn Swann, not John Stallworth…Chase Claypool.

The reason I strongly believe that this is not just a fluke comes in my confidence that head coach Mike Tomlin and starting quarterback Ben Roethlisberger will put the young, nimble receiver in the perfect and ideal situation to succeed and thrive for years to come. His natural ability should allow the rest to fall into place. His physicality off the line of scrimmage and great down-the-field vision are the reasons Claypool will have sustained success as a Steeler. His blazing speed (4.42 40 yd dash) and frame (6’4”, 238 lbs) won’t hurt his case either. The star wideout has made a strong first impression thus far and is on pace for 55 receptions, 1,072 yards and a whopping 19 total touchdowns. Whether he reaches 19 TD’s or not, his season will be nothing short of spectacular.

Owning an average of 20.1 yards per reception (third behind M. Gallup and DK Metcalf), any play is capable of going the distance. Claypool has caught a reception of 24+ yards in every game this season (only five WR’s have done so), which is why he’s shown the capability to perform time ang again, all the while providing a spark to a rather bland and tasteless offense. He’s a magician, pulling out tricks from his hat and making acrobatic catches all over the field.

Since the start of the season, his catches have gradually increased in each game proving that his potential is boundless with the right coach and support system in his corner. With the exception of week three versus the Houston Texans, the stud receiver has put himself on the highlight reel and doesn’t seem to be slowing down any time soon. After his week six performance, he now has six touchdowns on 22 receptions. His 3.53 PPR points per target is head and shoulders above any other player in the league (Allen Lazard is closest with 3.06). Put it this way, if he isn’t on your fantasy team as we speak, you might need to rethink your whole draft strategy.

There haven’t been too many Canadian-born athletes to make a significant impact long-term in the National Football League. Some of our notable Canadian players in the NFL are Austin Collie, Nate Burleson and Jon Ryan to name a few. It’s the receiver’s rare combination of size and speed that will allow him to establish himself in this demanding, competitive league. It isn’t a stretch to think that he may one day become the greatest Canadian player to ever step on the gridiron. Scouts spend their entire career relishing at the opportunity to mold guys like Claypool. There’s really nothing he can’t do or learn.  If the start to his career suggest anything it’s that the star playmaker has a bright future ahead of him. And as long as he works hard and continuously grows, it’ll keep getting brighter and brighter for the Canadian star.

MOUSSEAU – THE NFL: HOW BLACK QUARTERBACKS ARE CHANGING THE GAME