Young local starlet Trent Alexander Arnold stood over the free kick and my roommate laughed. “Trent’s taking it?” He queried. “Trent can hit them”, I fired back. As a red, the young players that make their way through the academy to wear the liver bird on their chest are held in very high regard, even if they’re only 18 years of age. I’ve followed Trent Alexander-Arnold for quite some time and knew he could take a set piece. Trent stepped forward and curved the ball into the corner of the goal and Liverpool’s Champions League campaign hit the ground running.

The Journey to Final

Most of us have a friend who’s a Liverpool supporter who endlessly talks about those special European nights. Quite frankly, if you’re not a Liverpool supporter, I can imagine hearing this almost mystical speech over and over again of how teams just magically crumble under the Anfield floodlights can become a cause of irritation. Love us or hate us, it seems to prove true often.

The first knockout game at Anfield since the 2008/09 campaign became a simple matter of acting professionally after hammering Porto 5–0 in Portugal. However, with the first leg of the quarter finals at Anfield coming against Premier League champions-elect Man City. There was very little doubt these magical Anfield nights would be put to the test. Manchester City had already run away with the Premier League and Pep Guardiola, with the likes of Kevin De Bruyne and David Silva, producing pure football brilliance along the way. I made it clear to every Man City fan I knew that they didn’t stand a chance of beating us at Anfield. We’d beat them at home not too many weeks before in the league and their record at Anfield leaves a lot to be desired.

On top of all that, with Jurgen Klopp’s record against Guardiola I felt confident that this tie would be decided by whichever team would be able to produce the best result at home. All those explainable and unexplainable factors of what makes a European night at Anfield so special came together and we dismantled Manchester City 3–0. We also managed to win 2–1 at the Etihad to see us through to the Semi-Finals. Reflecting on the tie, we took advantage when we were on top, held ourselves together when we were under pressure and got some luck along the way. However, we were the deserved winners and a trip to Rome awaited.

Roma had turned around a 4–1 first leg defeat against Barcelona, winning 3–0 in the Stadio Olimpico shocking the Catalan giants. Liverpool’s player of the season, The Egyptian King, Mohammad Salah would have the chance to face off against his former club less than a year after leaving Rome for Merseyside. At this stage, I started to believe it might just be destiny. Salah scored two sublime goals and we were up 5–0 with 20 minutes of the first leg left to go. I was on cloud nine. Two late away goals for Roma made the second leg relevant again, however, I kept reminding myself a three-goal lead going into a Champions League Semi-final second leg is something I should be grateful for. When Roma beat us in Rome we showed our first signs of real weakness in Europe since back in Seville. Nonetheless, we were going to Kiev. A 4–2 win for Roma meant we’d made it through by a goal. The tie was a lot tighter in score than in play over 180 minutes. I honestly couldn’t care less. Liverpool had made the Champions League Final.

The Final — The Build Up

Seventy two hours before kickoff, I felt knots in my stomach. I felt sick, nervous, and excited all at the same time. The exact nerves every football fan dreams of going into the month of May. The months of toil, shouting at the TV, chanting and hugging complete strangers, singing “Allez, Allez, Allez” into the early hours of the morning, cancelling clashing events, and “sick days” all leading to this. The chance to witness the five-time…MY five-time champions of Europe just one win away from lifting the most prestigious trophy in club football again.

The last time Liverpool made the final, the infamous Istanbul night, I was 13 years old. Now at 25, nothing else in the football world mattered. Kloppo and the boys produced the unexpected. The pinnacle of all pinnacles was just around the corner. The opposition that stood in the way of my dream? The most successful club in football history. The club that’s won this trophy three of the last four years and owns several of the world’s best players, like as Cristiano Ronaldo, Gareth Bale, Sergio Ramos, Marcelo, Toni Kroos and Luka Modric.

When Kloppo arrived at Anfield in October 2015, the club was resting players against Real Madrid and crashed out of the competition at the group stage. Kloppo told [the fan base] to turn from “doubters to believers.” He then took us to two cup finals, two top four finishes and put us back on the world stage with a Champions League Final, a place that every Liverpool fan felt we deserved to be. I was willing to admit that it’s not a divine right to be there, and in the last 10 years we simply hadn’t earned that right. Going into the most significant night of my life as a Liverpool fan I could be sure of one thing: “Kloppo, mission accomplished. I believe!” 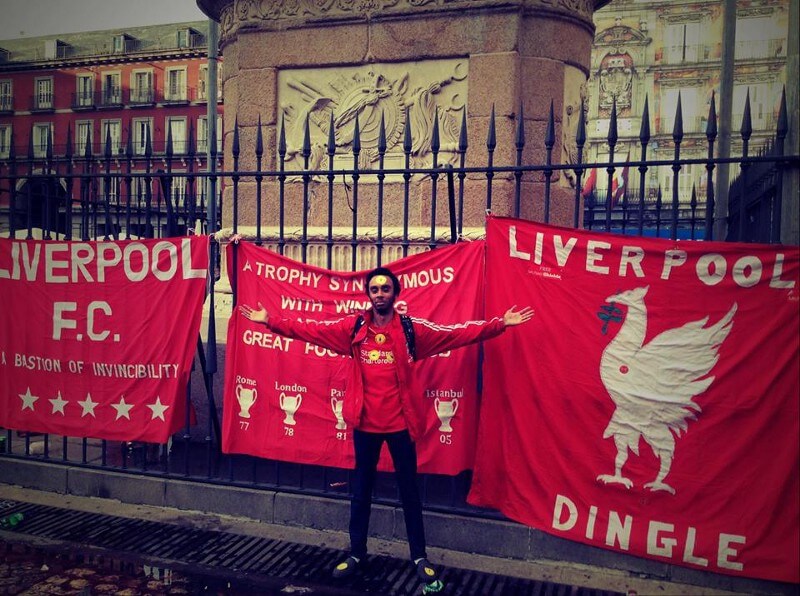 The Final — The Match

I’d arrived in Liverpool at 10 am and walked aimlessly and nervously around the city center for most of the morning trying to figure out what to do with myself. The 10-hour wait till kick off felt like a month. A few hours beforehand the singing began; this helped to take care of the nerves. Singing “Allez, Allez, Allez!” until Ramos and Henderson lead the teams out and kickoff was upon us.

The first 25 minutes, we played rock and roll football. We attacked, pressured, won the ball back high up the pitch and showed that we could compete with the very best toe to toe. Lots has been made about what happened next. Personally, I don’t think Sergio Ramos intended to do the damage he did to Mo Salah. What I do think, however, is that he had a chance to be physically aggressive with Liverpool’s best player and he made the most of that opportunity. Either way, he seemed delighted that he avoided a booking and that Mo Salah had to leave the game injured. There’s no saying that Liverpool would have gone on to win the game. Unfortunately, we’ll never know what a final with Mo Salah playing the whole game would have looked like, which is a shame for the million viewers, for us, and for Mo on a personal level especially after the season he’s had. Let’s hope he’ll be fully fit to suit up for Egypt this summer for the World Cup in Russia.

The play that followed, we only have ourselves to blame. We seemed scared and shaken for the 15 minutes after Salah’s injury, and just made it through to halftime without conceding. Two awful individual errors in the second half, and probably the best goal ever in the Champions League history for Real Madrid put the game comfortably out of our reach. Before we jump to blame Karius it’s worth pointing out he’d not made two errors that have led to goals in the 32 games prior to the final, and he held the record for most clean sheets (6) in the 2017/18 campaign.

Madrid controlled the game well in the second half. We showed great determination to level the game at 1–1 and were unfortunate not to bring the score to 2–2 when Sadio Mane hit the post. Mane was our best player on the night. The clear difference in my eyes was the depth of the Real Madrid squad and the lack of the same for red. Liverpool brought on Adam Lallana to replace Mo Salah and he simply lacked the match fitness to make a difference. The same can be said of Emre Can when he came on in the second half. Both spend months of the season injured racing against time to be fit for the final. Real Madrid, on the other hand, brought off the bench Gareth Bale. A world record transfer at the time of his move. Currently one of the best players in the world when fit and on form. Fortunately for Madrid on the night, he was both. My friend stood and applauded his overhead kick and I simply sat there stunned by his audacity. The third goal inevitably ended all hope. Our luck had run out. We were magical and gave it everything we had; we just fell short.

I’d watched the game with a couple of friends who have kids and some of the kids were in tears after the loss. We made a deal of letting them know that it hurts, and that we pick ourselves up and hold our heads high. As the words of our song go, “When you walk through a storm, hold your head up high.”

Unfortunately, this was the time when we had to practice it. We gave them a speech about how we support the best team in the world, have the best fans in the world and how the players have done us proud this season. All this, whilst holding back tears and turning away to wipe my eyes with my shirt. The truth is losing this final hurt. With reflection, I knew I’d be proud, grateful and thankful for the season we’d had. Nonetheless, in the moment it hurt.

Other English fans are often far too quick to enjoy the pain of others in defeat. I understand it; it’s the nature of the game. That’s rivalry. So let me respond. Manchester United was comprehensively beaten by Sevilla. Tottenham was sucker punched by Juventus and couldn’t recover. We did the double over Manchester City in earlier rounds. Chelsea lost to Barcelona and didn’t even come close and Arsenal was left falling short in the Europa League semi-final. Every one of those teams and their fans wanted to be in a European Cup Final this year and we made it. Not only did we make it, but we signaled to the world that Liverpool Football Club has woken from their sleep.

Though I’m hurt, I’m still hopeful. A final loss of such importance always takes some time to heal from, but when you look at what’s on the other side, It’s hard not to be excited. The football we play is attacking, attractive and as thrilling as any other club in Europe. Salah, Firmino and Mane are all about to hit their primes and there’s very little sign of losing them any time soon. Two days after the Champions League Final long-time Manchester United target Fabinho was linked with Liverpool. Within an hour and half of speculation, he signed from Monaco for £39 million. Not only was the timing good PR by the club, but the signing of Fabinho, one of the best young central defensive midfielders in Europe, was a statement that we can attract free agents from the prestigious pool again. Players want to come to Liverpool instead of direct rivals and we can compete for the best. With Naby Keita joining Fabinho and Liverpool linked with the likes of Nabil Fekir, Jan Oblak, Allison Becker, and Thomas Lemar. Gone are the days of Christian Poulsen and Paul Konchesky.

The season has been one that we can all be proud of, and the direction Kloppo and his coaching staff are taking the club in is positive. I’m optimistic that next season will only get better.