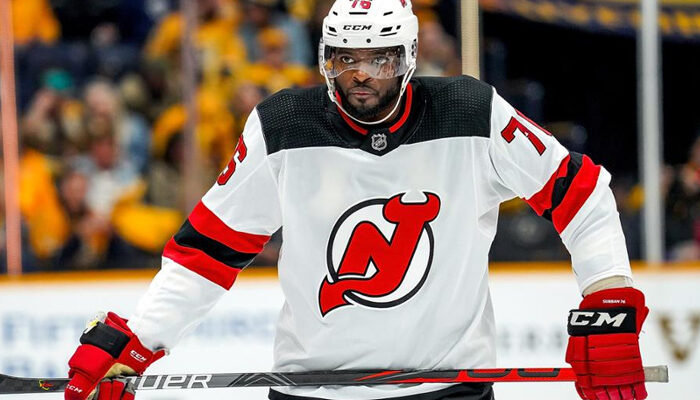 PK SUBBAN RETIRES FROM THE NHL AFTER 13 SEASONS

PK Subban retires from the NHL after 13 seasons. He took to Instagram to make the announcement. Here’s a quick look at his All-Star career.

In the last few days, hockey pundits were discussing the next possible landing spot for NHL defenceman PK Subban. Well, today he shocked the hockey world by announcement his retirement after 13 seasons. He took to Instagram to share the news.

I remember my dreams of playing in the NHL and winning a Stanley Cup, similar to the guys on the Don Cherry Rock’em Sock’em tapes at the end of every volume, with the black eyes, broken bones, and tears of joy. To this day, I still dream about it.

However, the end of this chapter is closing and after 13 years in the NHL, I have made the decision to retire.

“I never looked at myself or ever felt I was “just a hockey player.” I always looked at myself as a person who happened to play hockey. Having that perspective allowed me to enjoy every shift like it was my last, celebrate every goal with emotion, and play every game as if someone paid to watch me play who had never seen me play before…I look forward to the road ahead, and the many exciting opportunities to come. I’m excited to share what those are with you all when the time comes!”

We went on to thank her parents, Karl and Maria, his fans, and the three organizations he called home during his career.

Subban was drafted by the Montreal Canadiens in the second round, 43rd overall, in the 2007 NHL Entry Draft. We went on to win the Norris Trophy as the top defence

The Canadiens selected Subban in the second round, 43rd overall, of the 2007 NHL Entry Draft. In 2013, he won the Norris Trophy as thetop defenceman in the NHL, tying Kris Letang as leading scorer among defencemen that year. Off the nice, we supported a number of charities and organizations in the Montreal area, including Montreal Children’s Hospital which continued to support throughout his career. As the most high profile Black player in recent memory, he was also vocal on race issues within the sport.

With one of the biggest personalities in hockey, it’s no wonder he eventually landed at ESPN as an analyst.

Whatever he chooses to do next, the future remains bright for the Scarborough native.