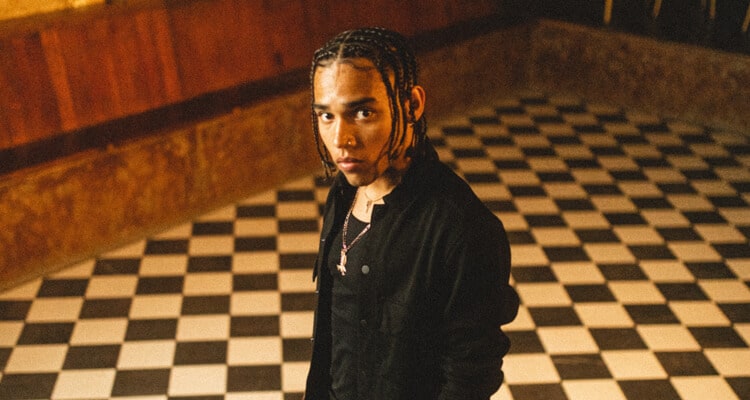 SHIFTER’s Artist of the Month for December is Toronto-born and Kitchener-raised rapper, singer, songwriter and producer, Dom Vallie.

Born Dominic Omario D’Aguilar Turton on September 13th, 2000, Dom started writing rhymes at 12 years old and two years later recorded his first song on a Blue Snowball USB mic he received for his birthday. From that point on, he started to take his craft more seriously and immediately began working on his debut mixtape Nights which was released in 2017. This was just the beginning for Dom. In 2018, on a road trip to visit family in Quebec, he was browsing through beats from his long time friend and producer Thomas Buchanan (aka Tomb) and came up with his first hit single “Scared Of Death” which dropped in May 2019 and has collected over 400,000 streams on Spotify alone.

Dom writes all of his own songs, directs all of his music videos and brings intense energy to every one of his performances. He continues to hone in on his art and progress every chance he gets.

Art form/creative discipline: I am a rapper, singer, songwriter, and producer. I like to challenge myself in doing things outside of my comfort zone. I direct all of my music videos and make probably 50% of my own cover art. Anything that goes with being an artist, I like to try and tackle.

Honestly, I don’t feel like I have accomplished anything worth bragging about yet. Looking back, I’m proud of my streaming numbers. I’m proud I was able to host shows before COVID and sell all my tickets. I’m proud I have a loyal fanbase that will buy my merch and share my music, but I feel like the real work is yet to be done.

This is a tricky question because I like to experiment in different genres. I’d say as a rapper, my biggest inspiration is Lil Wayne. His lyricism, delivery and bars are all unmatched and the amount of content he puts out, he’s never gonna get old in my opinion. As a singer, I really look up to Michael, he held the world in his hands and he never failed to make a hit. But as an overall artist, I’d have to say the Red Hot Chilli Peppers or Drake. The Chilli Peppers were such a care free group and had so much swag. They just channeled amazing energy whenever they performed. It kinda put you in a trance… And Drake is such a strong businessman. He keeps his ear to the streets and he knows exactly what to put out, even if the listeners don’t know they want it.

If money wasn’t an option I’d still be making music. I’d probably just be less stressed about doing it lol. Since I was 10 years old, I wanted to be a rapper and in me pursuing this I think I’ve really found myself. I’ve experimented in genres I never would have thought to even listen to. Making music is so therapeutic so I think taking money out of the equation would just make it 10 times more rewarding because I wouldn’t have to stress about if the song is gonna do well or not. I’d just be creating.

In 5 years, I hope to be all over the world. Performing is probably my favourite part of this whole rap thing. That feeling when you get on stage and everyone is giving you energy and you just get to give it back to them; there’s nothing like it. I hope to do that all over the world in as many different countries as possible, interact with as many different people as possible.

I wanna drop a Christmas album at some point in my life, like some real Michael Buble type album. I love Christmas music. Like, I’ll for real be playing it on aux as soon as it snows the first time. I think it’d be hilarious if I dropped a Christmas album, but I’d actually enjoy making it.

If I could give one piece of advice to other artists it would be to stop overthinking. For real. I know we’re creative so our minds are always going on how we can tweak things or add things, or make things better, but you gotta stop. I guarantee your first attempt, first thoughts, are always gonna be the best ones. That’s what’s real. Music and art isn’t supposed to be heavily thought about – it’s supposed to be felt. Stop thinking, just feel it out.

I’m currently working on a couple of EPs, like 2-3. One for the ladies, one for the mandem to turn up to, and one with my guy Soldado, a UK producer. We’re trying to make a new style of drill music. On top of that Tomb and I have been working on Nights 2 since the first one dropped in 2017 so that’ll be coming as soon as it’s ready. Also my first studio album. I’m putting a lot of work into this one and I think it’s definitely gonna be the best music I’ve ever put out. I think I’m really gonna surprise people. There’s no telling when these will come out but I can say for sure, the first EP will be out early 2021.