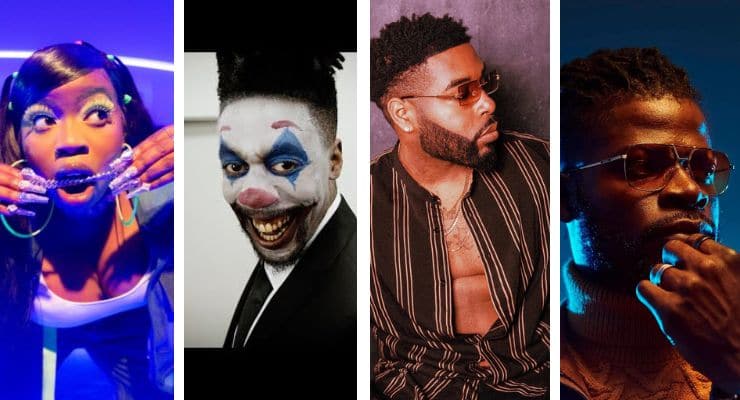 SHIFTER’s Canadian Music Video Roundup is back! And we are coming in hot with some smashes from across the country! Check out our top 10 October music video releases listed in order of release date below!

While you’re here, don’t forget to place your vote for Video of the Month!

Island Baby should not only make Vancouver proud, but the Philiopino community too! In their latest music video they bring a new meaning to Filipino word “maarte.” Maarte is slang for high maintenance and translates to artsy, according to Manila Grey. The R&B duo tributes this song to strong beautiful women in their lives, who honour their high standard with vibrance, class and grace.

Hip Hop artist Dax releases his first studio album, Pain Paints Paintings. This bumping head nodding album only showcases a fraction of what Dax’s work ethnic looks like. Along with his 16-track project, Dax created a video for every single in the project. While Dax is searching for the meaning of 40 days and 40 night, you should check this video along with the others he released thus far.

Mirroring the story of LeBron James, the Montreal Hip-Hop artists is scoring some major attraction with his latest bilingual collaboration with Quebec rapper FouKi. In the music video, the two stunt at an eating and car racing competition. As they both spread poutine sauce across the nation, FouKi celebrates his win at the Quebec Association of the Recording Industry Gala for Male Performer of the Year.

Showing the progression of a crush, Shopé brings back the joy of puppy love with his latest music video Pepper Dem. The video features Toronto choreographer Cheyanne Chante and young actors Tehya Tucker and Peyton. The Afrofusion track is his last release from his 2020 album RIKKI. The Nigerian-Canadian artists is looking forward to his next projects, but until they release, make sure to check out this video below!

A year after writing it, Adria Kain releases this soulful harmonious single. In a recent post she writes, “I wanted to create a voice for myself. One that I could run to whenever there was no one else. One that would create a platform big enough for me to exist in without boundaries, like the Ocean, because what’s bigger than that really.” This music video gives us an intimate look into Adria previous relationship – The fun, the arguments, but mostly the value of holding on.

Pisceze releases a music video for the second single this year, Play it Back. The Korean-Japanese artists brings her unique style and poise to the screen. In November 2019, the Toronto-raised artist dropped her first single “What’s Your Sign,” that quickly garnished her over a million streams. This rapidly growing R&B Soul-Pop artist has since collaborated with JAHKOY, Shawn Mendes, BTS, Sabrina Carpenter, and more.

After an exciting release of her debut EP HOOD AVANT-GARDE earlier this year, the rapper continues to stay active. In March, she released a music video for her hottest single yet, WOO!, then DOUBLE DOUCH in May. Surprising fans with more she released the deluxe version of her EP adding three additional songs all accompanied with features. The Deluxe EP included a collaboration with Toronto-native Haviah Mighty. As the year progressed, she made her first few live performances at Manifesto, Cranium Festival and the Apollo Theater. This baddie has proven that not only does she have some of the illest bars, but that her Bad Bitch Mentality is what’s going to take her to stardom.

Being a nurse, author and R&B artist, Liza still found the time to release this etheric inspired music video. Throughout this video Liza is walking through a Catholic church, taking a moment for a lost life. Cascading this record with ethereal harmonies, the YouTube’s Voices Music Class of 2022 artist continues to surprise us with new projects which purpose threads deeper than the eye can see.

Ms. Romeyo is back with another video that’s prefect to add to your date night playlist. This record is off of his latest EP Breakfast In Bed, where is vulnerably professes about his pervious toxic and sexually heated relationships. This video shows a glimpse of what it is like to fall in love with Romeyo Wilson.

Although KTheChosen is responsible for this collaboration he only raps the chorus, the rest of the song is rapped by Calgary-based artists Dorsa Lena, BViae and Zhe The Free. This single is apart of his latest project +Vice, a 15-track album that shares a story about a lost friend. Inspired by the need to amplify female voices, this song is definitely an anthem for the ladies.